Twinkie the Kid
by Rita

Mascot Costumes for Kids and Adults 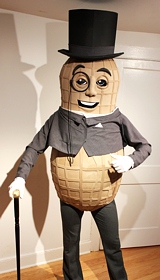 If you're having trouble coming up with ideas, think Mascot Costumes this Halloween. Now, I know what you're thinking - who wants to dress up like Brutus the Buckeye or Mr. Peanut? Where's the fun? Where's the imagination? And what do those Mascot characters have to do with Halloween?

Halloween is all about pretending to be someone (or something) you're not. And everyone expects you to dress up as a moaning, groaning zombie or a glittery vampire. They automatically assume someone's going to show up to the party dressed as a mermaid or one of the characters from Avatar. But mascots – now that's another story.

People don't automatically think about mascots when they start planning their Halloween costume. Most are fuzzy and warm, with big silly grins. The exact opposite of the image most people want to portray for Halloween. But you can use that to your advantage.

Imagine coming to a Halloween party dressed as the Ohio State University mascot, Brutus the Buckeye. But when you walk into the room you're dragging a dead, bloody wolverine behind you!

Where can you find a good mascot idea? Some of the best are right here at Costume Works. Just take a stroll through our photo galleries and you'll see dozens.

But you can also find mascots just about everywhere you look. Every sports team has a mascot – high school teams, college teams and professionals as well, and almost every sport, in every country. So there's a huge pool of ideas to draw from there and you can see a great example sent in by Brian. This is his Uncle Freddy dressed up as the Texas Longhorn mascot, Bevo. 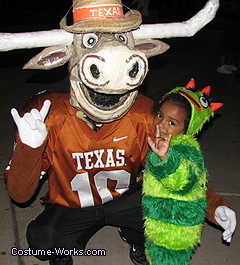 Advertisers and manufacturers have mascots, too. For example, check out this photo sent in by one of our readers. Everyone's dressed up like the mascots in the Kia Super Bowl commercial. 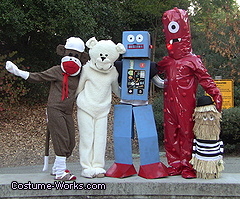 Children's shows are a great place to find mascot ideas, too. And who's the most well-known mascot of all? Who's the leader of the band that plays for you and me? MICKEY MOUSE! 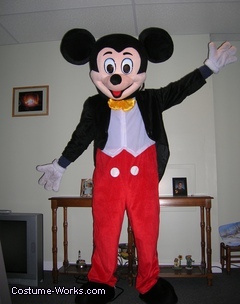 Now, you're probably wondering about originality and horror. After all, that's what Halloween's all about for most people. The scarier and more gruesome the costume the better.

With a little imagination and just a bit of preparation, any costume can be 'Zombie-ized' or 'Vampire-ized' and how fun would it be to show up at the party dressed as a Zombie Mickey Mouse or one of the Coca-Cola Polar Bears with fangs and a cape, sipping on a bottle of blood? 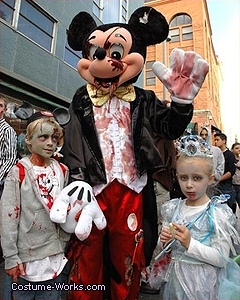 Halloween isn't far off but you still have plenty of time to create your own homemade costume and enter our 2020 Halloween Costume Contest. We can't wait to see your pictures and share them with all of our readers!