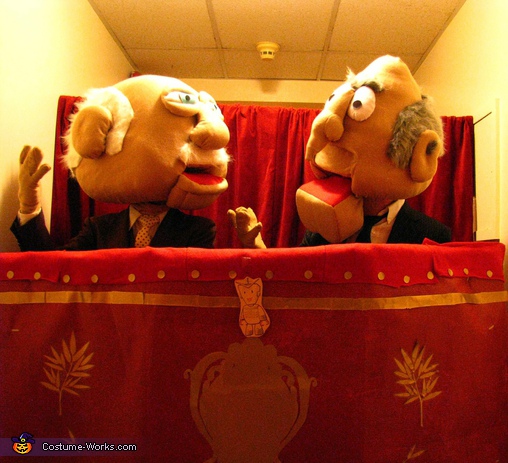 A word from Mark, the 'Waldorf and Statler' costume creator:

This year, Joshua Womer, and myself, Mark Ruszkowski, created the two crumudgeons that sit stage left on 'The Muppet Show', Waldorf and Statler.

Knowing a new movie is coming out next month, as well as that these two guys have been a favorite of ours for some time now, it only seemed fitting to attempt to make them into a home-made costume.

To do this we found couch cushions (and vinyl) that somebody was going to trash, spent a total of $16 on faux fur and polar fleece, used things from around the house (for example; glue, thread, and magnets for the eyes). Aside from that we shaped, sewed, affixed, and designed everything entirely on our own without the help of any machine or professional (home made and hand made!!!).

Everything, including the balcony, took about a month to create.