Willy Wonka and Friends
by Maria 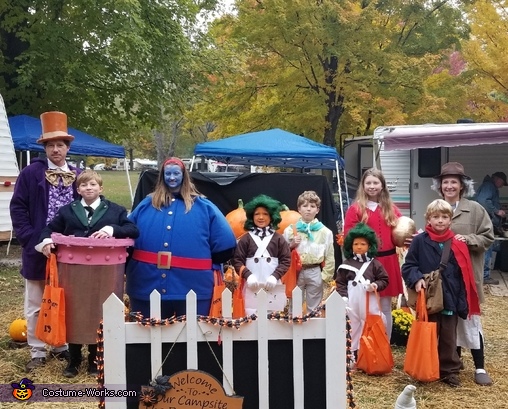 Wonka's at the Campground

A word from Shaun, the 'Wonkerer's' costume creator:

Our family of 9 does a group themed costume every year as our Halloween tradition. We come up with ideas as a family, taking input from all 7 of our children. Since we make our own costumes, we also take into consideration the feasibility and financial aspects involved. The most difficult part is picking a theme with enough characters. Then we vote. We try to pick our costumes based on what will be fun and make people smile and apply to kids of all ages. This year, we chose the classic "Willy Wonka and the Chocolate Factory" ensemble, the 1971 version.

Since the majority of our costumes and props are homemade, we try to use things we already have at home. We will use old costumes, clothes and whatever our imagination can create. Since we make such a big costume, we often hit thrift shops. We find a lot of items to repurpose or often buy items just for the fabric. What was originally a women's overcoat, after a lot of cutting and some added details became the coat for "Willy Wonka". The costume for "Charlie Bucket" was completely repurposed, topped off with our very own homemade Golden Ticket. For the costume of "Grandpa Joe", we created a nightgown out of a bedsheet. We also added an overcoat and a cane and glued hair to a felt hat. For the costume of "Mike Teevee", we added tassles to a shirt from a thrift store. We also added a home-made bandana, a white cowboy hat, and two guns in a holster. The cowboy boots were originally brown, so we spray painted them white to give original detail.
"Veruca Salt's" dress was completely hand-made. The "Oompa Loompa" costumes consist of refashioned brown sweatshirts, hand-made overalls, and hand-made shoe covers. The hat for the costume of "Willy Wonka" is made of cardboard and paper mache. The bow and vest were hand-made. The two most difficult costumes were the costumes for "Violet Beauregarde" and "Augustus Gloop". The costume for "Violet Beauregarde" is a blow-up suit. To add detail, we created an entire outfit that would be able to fit over the blow-up suit. The costume for "Augustus Gloop" consisted of a one-piece unit, made from a cardboard tube covered in fabric. We then used clear plastic, poster board and styrofoam pieces to create details on the tube. We used shoulder straps and foam to help lift the weight of the home-made unit. The shirt and jacket were glued into place and buttoned once he was in the costume, and finished with tie and a little "chocolate" make-up.
We make as much as possible ourselves. The few items we can not make, due to difficulty or time, we hit the costume store for finishing touches. This includes wigs, blow up suits and some hats.
Since this is a family costume, we try to let everyone help in some way. The older kids helped with sewing and prop making, and the smaller kids helped with the paper mache. My wife does the cutting and pattern design and I usually handle the majority of the sewing.
Ultimately, we try to be as creative as possible and work together to make something fun for all!
We love getting reactions from people of all ages. It is fun to watch people take in each character, remember their names, get excited, and then enjoy the group as a whole. The size of our family makes us stand out already, but when everyone sees us walking down the street as the whole ensemble heads turn. We were stopped many times for people to take pictures. The best thing about this costume is that it resonates with all ages. Kids, parents and grandparents alike, all recognize these classic characters. We get a lot of smiles, compliments and high-fives as we meet people. This is like the applause at the end of a show, we love the opportunity to make people happy.
This costume was a lot of fun and overall we were happy with the final product. All of the costumes were made at home. In all, we have 9 characters:
"Oompa Loompas" (age 5 and 7)
"Charlie Bucket" (age 8)
"Mike Teevee" (age 9)
"Augustus Gloop" (age 11)
"Violet Beauregarde" (age 12)
"Veruca Salt" (age 14)
"Grandpa Joe" (age 35)
"Willie Wonka" (age 40)

This is a family tradition that we have been doing since our oldest was a baby, and it has just continued to get bigger and more fun. We enjoy this time as a family each Halloween. Our friends and family look forward to see what we are going to present each year. We always keep the theme a secret until right before Halloween. It is always surprising the number of people we have asking what we will be next, and the closer we get to the big reveal the more people who are waiting anxiously to see. The hardest parts are keeping it a secret and deciding what we are going to do to try to top ourselves next. The discussion for what we will be next year usually begins right after the holiday. Due to the number of costumes and the other things that come with having a big family, we usually start building in August but always end up working on details until we walk out the door Halloween night.
We love the whole process, but in the end, making unforgettable family memories and bringing joy to people is what makes this our favorite holiday.