The Titanic and the Icebergs
by Kim 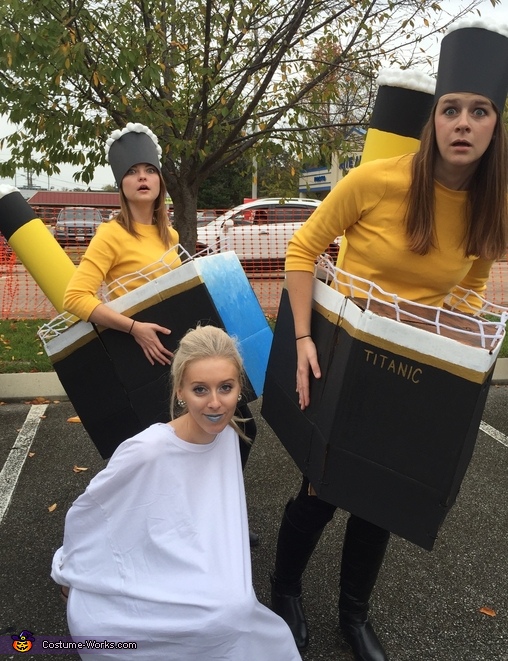 Titanic After the Crash with the Iceberg

This homemade costume for groups entered our 2015 Halloween Costume Contest, in the Best Group Costume nomination!

A word from Allison, the 'Titanic and Iceberg' costume creator:

Me (Allison) and my best friend (Elaine) always make our costumes 100% homemade, and since it is our senior year of college, we wanted to go out with a bang (or a crash! Haha). We searched on Pinterest and Google for ideas for a long time but could never find anything that stuck out. Finally we ran across two girls dressed as Titanic, so we decided it would be perfect. We made our costume from several cardboard boxes and pieces of cardboard. In order to attach the boxes together and keep them sturdy, we used zip ties. After assembling the whole thing, we painted the base of the ship black, the rim of the ship white, the strip of accent gold, and the deck brown/black. We made the handrails by attaching pipe cleaners together. We made the smoke stacks with yellow poster board, black paint for the top, and duct tape/cotton balls for the smoke. We wore yellow shirts and made hats (made from black poaster board, duct tape, and cotton balls) to act as the other two smoke stacks. We made the whole ship in two separate pieces with blue/white paint painted in the middle to show the ship breaking and being filled with water. The last touch was writing "Titanic" in gold on the bow of the ship. Our roommate (Tori) didn't have a costume, so we told her to be the ice berg that the Titsnic ran in to. She got a 4XL white tshirt, spray painted glitter on it, spray painted her hair white, and wore some icy/blue makeup to make her look cold.