The Headless Help in the Haunted Mansion Costume 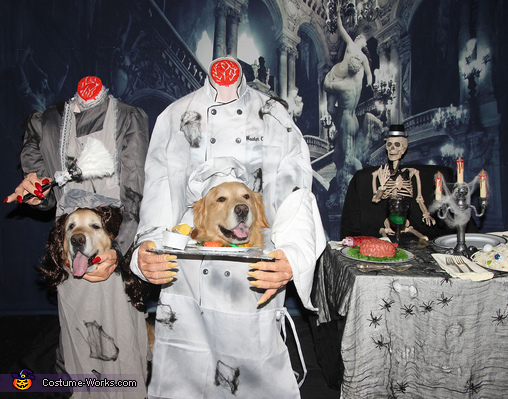 The Headless Chef and Headless Maid

A word from Bonnie and Beth, the 'The Headless Help in the Haunted Mansion' costume creators:

There once was a most creepy haunted mansion, headed by the skeleton Mr. Bones. Mr. Bones hired only the best of haunted help to care for his every need, so of course he chose golden retrievers Phoenix and Gryphon. Phoenix is the mysterious maid, who makes sure to dust the entire mansion as well as her own head, which she carries in her arms. Gryphon is the shuddersome chef who is so willing to please his master that he is serving up his own head on a silver platter for dinner, with spaghetti and eyeballs as a side dish.

These home-made costumes were created to look like illusions, and did not involve any photo-shopping. The materials included chef and maid costumes, gray spray paint, black cobwebs, mannequin torsos, paint, latex hands, stuffing, a wig, nail polish, foamboard, tin foil, yellow yarn, fake eyeballs, a skeleton, fake foods, and glue gun and glue. We altered chef and maid costumes to fit the dogs and to look more creepy by spray painting them gray, gluing on cobwebs, and tearing rips into them. We painted mannequin torsos skin color and also painted them red with veins on top to be the bloody necks, and attached them into the collars and chest area of the outfits. We stuffed the outfits to give them shape and attached rubber hands. We even painted the nails red for the maid. We cut special holes in each costume so that when the dogs wore the costumes, their heads would stick out the middle, near the stomach area. For the chef, we created a platter out of foamboard, which we covered with tinfoil and decorated with plates of fake foods and then attached it to the outfit. We also created the background props, including the spaghetti and eyeballs made out of yellow yarn with plastic eyeballs, plastic bodyparts, and set the table to be both spooky and elegant. These costumes took about a month to create, but we had a good time!