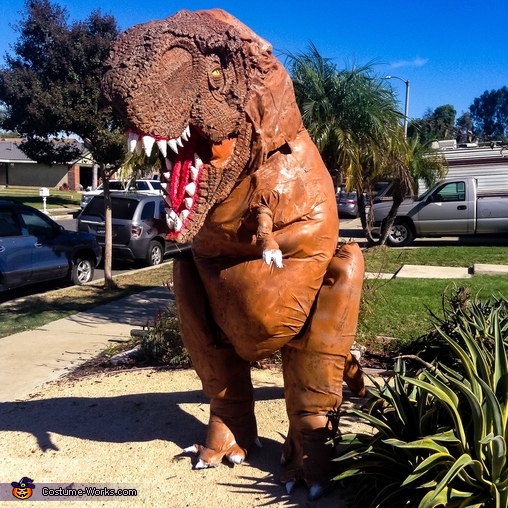 A word from Ben, the 'T-Rex' costume creator:

The Wearer of the costume is was myself Benjamin Delgado III I'm A 26yr old Costume/Diorama building Hobbyist from Southern California,

As far as where the idea for the costume came from well one day I saw a video on Youtube where a guy was walking around wearing digitigrade stilts and after seeing that I knew I wanted to build a costume around that concept and it just so happened that the Jurassic world 2 movie was playing in theaters around the same time that I stated planning out my costume design so a T-Rex fit the bill quite nicely.

I cut and carved the head Teeth, body, Tail, arms and legs out of upholstery foam using scissors and a soldering Iron, keeping it together with spray fabric glue, ty raps contact cement adhesive and a Hot Glue-Gun, the eye is made out of a round Christmas ornament and the eye-lid is made from thin foam, inside the arms are bent PVC pipes, the skin for the body including the head cheeks is made of stretchy fabric covered with bath tube silicon caulking, the internal skeleton of the costume is made out of chicken wire with reinforced hoops and a light metal bar holding up the head, inside the legs I built digitigrade stilts out of piece of wood shaped like a dinosaur foot print and metal shelving/screws and a leg rest with buggy cords acting as ligaments, I sprayed the head with plasti-Dip before Spray painting the whole body, there's a small speaker in the head that I control though my phone to make the t-rex roar and play the Jurassic park theme song, there is also a very small camrea in the mouth that allows me to see from within the costume by my phone.