Heihei from Moana
by Barbara 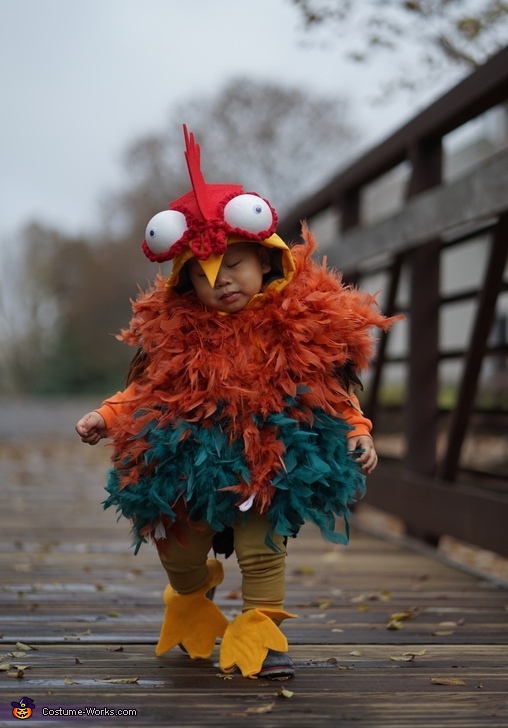 A word from Jessica, the 'Little Rooster HeiHei' costume creator:

This little rooster was originally going to be a chicken, but since dad wanted his boy to be something “cooler” we settled on the king of all chickens! Now let’s be realistic here. There’s nothing “cool” about a kid in a chicken costume. So we chose the cutest picture we could find off the internet to model him after, and that happens to be HeiHei the rooster from the Disney movie Moana.

Halloween in Minnesota is rough. At best, you’re dealing with cold fall temperatures in the mid-40s, and you’re lucky if it’s not raining. And worst case scenario is the infamous Halloween snow storm of ‘91. So either way, his rooster costume was going to have to be something that could keep him relatively warm to last through the festivities, because nothing is worse than a cold and cranky baby.

So using a warm yellow puffy hooded vest as a base, I sewed on 2 feather boas, and added some loose feathers here and there for accents. And knowing that I’m dealing with an active 18 month old, I designed a removable snap-on rooster butt. Using a plastic takeout container and gluing on an impressive display of tail feathers, it can be left on for photos and laughs, then removed when baby just wants to run around and play free of obstructions. For the rooster head, I added on some styrofoam half spheres from the floral crafts section and googly eyes, and colored felt and popsicle sticks completed the ensemble, creating the rooster comb, wattle, and chicken feet.

All in all, this amazing costume can be put together for around $30! The adorable photo ops alone are priceless at this age. And once Halloween is over, you can totally unstitch the feathers and use the puffer vest as it was intended to combat the rest of the vicious winter season.