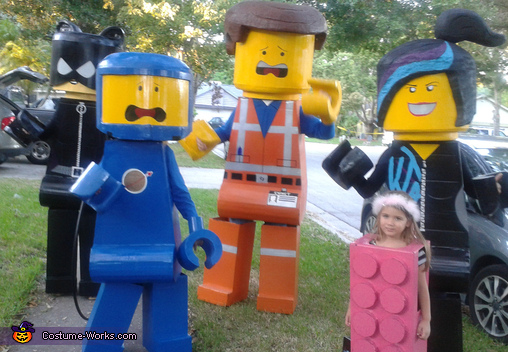 A word from Geoff, the 'Lego Movie Family' costume creator:

Inspired by the Lego Movie, the characters are "Emmet" (Geoff Ford), "Wyldstyle" (Jasmine Sampson), "80's Space Guy" (Jackson Ford), "Catwoman" (Madeline Ford), and Pink lego block princess (Tori Sampson). We freely admit that Catwoman was not in the Lego Movie...nor was the pink block lego princess, but both girls are still lego-themed, and awesome.

Construction of the costumes took place beginning in July right up until Halloween Day. They were made mostly from sheets of 2 inch insulation foam and cardboard. 4 rolls of duct tape and about 100 cans of spray paint were also used. The foam was coated in spackling and elmers glue to both smooth out the bumps and also seal the foam for spray painting (or else the foam melts). A piece of window screen was used to provide visibility via a small cutout for the mouth or eyes (catwoman). The hands were also made by gorilla gluing 4 pieces of foam together, with a PVC insert as the sleeve. The pink Lego block was constructed completely with cardboard and duct tape...with lots of pink paint.

All of the foam pieces were carved using a sanding bit on a drill press. Some of the detail cuts were made with a dremel. Steak knives were used for rough cuts.

The basic material costs weren't too bad: $25 for each sheet of foam (1 needed for each of the character costumes), $10 PVC for the hands, a window screen from a garage window (free), and lots of cardboard (free).

The expensive part was the glue and paint. I used about 30 oz of gorilla glue attaching the pieces of foam to each other and to the cardboard. I used 4 rolls of duct tape, mostly on the cardboard bodies and legs. And of course, 100 cans of spray paint...at $3-4 a piece? Not cheap. But regardless of the time and expense, it was a fun project and the reactions we received Halloween night were priceless.