The LEGO Movie
by Rebecca

Everything is Awesome LEGO Family Costume 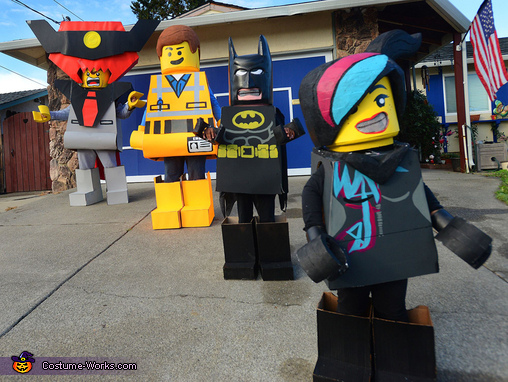 The Everything is Awesome LEGO Family

A word from Chris, the 'Everything is Awesome LEGO Family' costume creator:

My daughters are in love with the LEGO Movie. They are constantly quoting the movie and singing the Everything is Awesome theme song, so when it came to coming up with an idea for this years family costume, it was a no brainer.
My 3-year-old already thinks that she is Wyldstyle, the female lead in the film.

Everything was built by hand using cardboard, poster board, styrofoam and insulation foam.

All four of us have different body types and sizes, so I had to measure everyone, measure the LEGO minifigure using Photoshop and adjust each costume to fit accordingly.

Starting in August, I made the bodies and legs with cardboard and covered them with colored poster board or paint. I made a frame for the head using two circles cut from insulation foam with four bars for support and wrapped them in thin cardboard.

The hair was the most difficult. I cut rings of styrofoam and glued them together with Elmer's glue. Then they had to be sculpted and cut using an electric carving knife. All the foam had to be sanded and shaped using a belt sander nailed down to a table.

After all the pieces were constructed, everything was painted or wrapped in colored poster board. I cut out mouth holes, to see through, and glued a piece of thin metal screen inside.

All of the facial and body details were first sketched on to each piece, and then painted freehand. It took quite awhile to finish all four an I was actually making final touches on Halloween day.

The final cost of the project was probably around $100 with the insulation foam being the most expensive material at about $5 a square sheet at Home Depot.

It was worth every penny and the time and effort to see how happy my children were. We were celebrities at their Halloween party. Though some thought I was a bit insane, everything was awesome. Everyone wanted to pose for pictures with us and we even got asked to make an appearance at an upcoming car show.