How the Grinch Stole Christmas
by Kim

How the Grinch Stole Halloween Costume 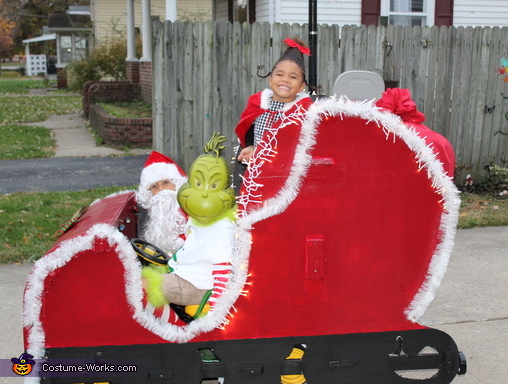 How the Grinch Stole Halloween Costume

This homemade costume for groups entered our 2018 Halloween Costume Contest.

A word from Jennifer, the 'How the Grinch Stole Halloween' costume creator:

My oldest son Jaylen wanted to be the Grinch. I (mom) came up with the idea of doing a theme with all of them, How the Grinch Stole Halloween. My son Jaylen (6) is the Grinch. We bought his mask off Amazon. I found a pair of green gloves at a festival and ought a green feather boa to add to the gloves for extra fur. I took a plain white sweatshirt and glued the Christmas tree and letters on the front, used red duct tape for the stripes on the arms, then sewed some of the green boa on the collar. I took a pair of his shorts and sewed more of the boa on the bottom. He also wore a pair of my old softball socks that had that candy cane look. My other son Javon (4) was Santa. I purchased the costume off Amazon. My daughter Jerzi (4) was Cindy Lou Who. Her dress and Cape I ordered. I did her hair by placing g a small cup on her head, then pulling her hair up over it. I left some on the side, where I braided in pipe cleaners to make it curl up. My dog Deeogie, was Max. I made her antler put of aluminum foil. After I formed it how I wanted, i put masking tape around it to help hold it in place and look real. I used yarn and a velcro strap to hold it on her, yet it didn't make it after a couple shakes ha ha. The sleigh my husband built out of cardboard. The kids had a John Deere gator, so he made a frame around it, then attached the cardboard to form a sleigh. He then painted it. We added Garland and battery operated Christmas lights. We also placed a bluetooth speaker inside so we could play "You're a mean one, Mr. Grinch" as they drove house to house. My kids absolutely LOVED it, as did the neighbors. We had a great Halloween!