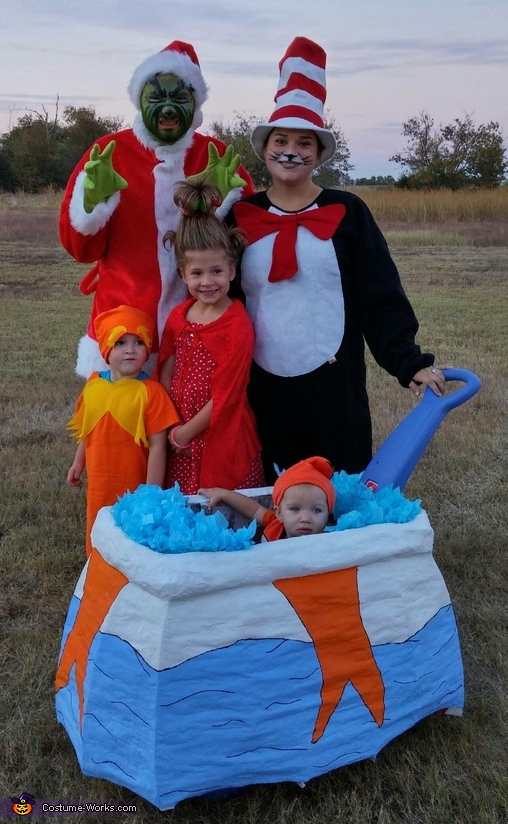 A word from Brandi, the 'Dr. Seuss Characters' costume creator:

We decided last Halloween that we wanted to be Dr Suess characters this year, our 7 year old (6 at the time) mentioned she wanted to be Cindy Lou Who and we ran with it. We are a theme style family and LOVE Halloween! Chris (Dad) is the Grinch and his pants, shoe covers, and gloves are homemade, the jacket and hat are from an old Santa costume. Brandi (me/Mom) as Cat in the Hat is in an old store bought costume, which I have owned since High School, but the shoe covers are homemade. Keagyn, 7 years old, is Cindy Lou Who, her cape is homemade, and her hair is a work or art with a styrofoam cup in place to keep its form. Koben, 3 years old, is the Lorax, his costume is fully homemade out of flannel and felt fabric. Kinlyn, 15 months old, is the goldfish, her fishbowl is paper mache and hand painted. We started with a large box and added curved ribs around the outside of the box, and rolled up newspaper around the top, we then covered it with mesh tape, several layers of paper mache, and then a layer of joint compound. After the it dried I then hand painted the fish tail and the water, I added blue tissue paper to the top to look like splashing water. This fishbowl sits on top of her push car, which Chris had to build a support brace so the fishbowl didnt rub the wheels. We were a big hit at every function we attended in theae costumes, we were asked many times if people could take our photo or if their children could take a picture with us. I'm not sure how we can top this next year!