Pirates of the Carribean
by Bob 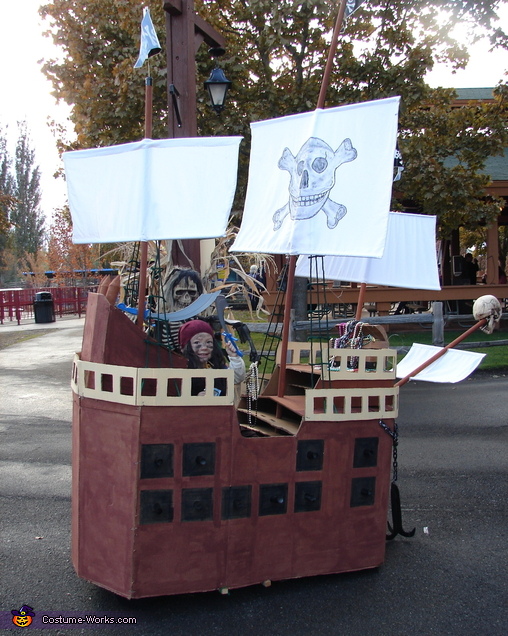 This homemade costume for boys entered our 2010 Halloween Costume Contest.

A word from Nichole, the 'Pirate Ship with Pirate' costume creator:

This pirate ship is completely made with cardboard, wiring, pipes(for canons), paint to paint the ship(all painted by hand). The pirate ship has a custom made bench seat that sits on a radio flyer wagon. The pirate chest is made of cardboard as well and wired together. I have put a lot of details into this ship to make it look at real as possible. I attached a string to the end of the ship so I could pull it around, you can't even tell there is a wagon under the cardboard. In the ship itself I cut out holes to insert the pipes(cannons). There are 20 cannons in total and the canons will actually launch out bullets(balls) for a realistic pirate ship! I used white material and cut them out for the flags and hand drew the skulls on the material. The poles holding the flags up are large pipes. Another realistic feature is, I have attached a nearly invisible string for my son to pull which pulls on the skeleton and the skeleton is rigged to fight with his sword so in other words; my son pulls the string with one hand and fights with the other and it appears that the skeleton is actually fighting him! All in all this whole costume costed about $3 as cardboard, piping, wires were free. The cost was for paint. We already had the swords and jewelry from Halloween!

Happy Halloween to all, hope you like the costume because my son loves it. Time it took was about 16 hours.