Alice in Wonderland Cheshire Cat and Mad Hatter
by Sherry 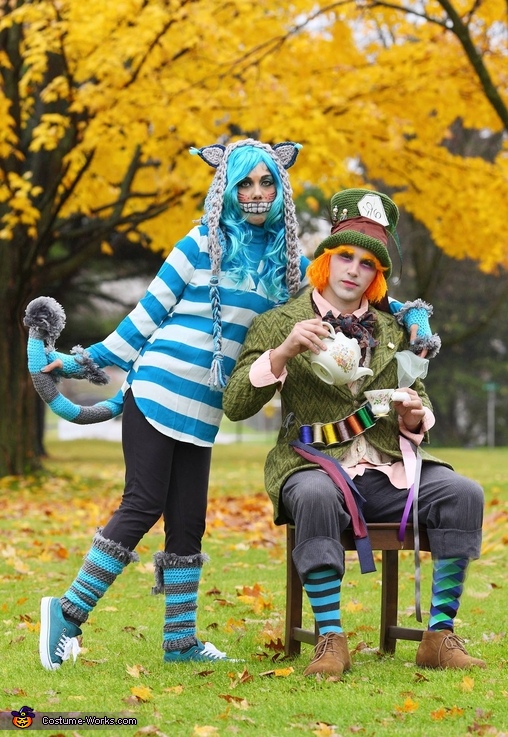 A word from Nadia, the 'Cheshire Cat and Mad Hatter' costume creator:

I am the Cheshire Cat inspired by the 2010 movie Alice in Wonderland. I crocheted the hood, the tail, the hand warmers, and the leg warmers using Red Heart yarn, Bernat Yarn, and Lion Brand yarn. I made video tutorials for the hand warmers, leg warmers, and hood, and wrote the patterns that are available on my website for others to get inspiration and make themselves. I bought the striped shirt from Rue 21 for $6, The leggings and the turtleneck shirt were bought at a thrift shop for $2 each. (I ended up getting the shoes for free as I had a coupon for Maurices). I bought my wig from Walmart for $7

All the makeup on my costume and Nate's costume were inspired by photos and video tutorials I found on Google and YouTube.

Nate is the Mad Hatter inspired from the same movie. Johnny Depp's character. From top to bottom, I crocheted the Top Hat using a Red Heart Yarns Pattern that has a video tutorial online filmed by The Crochet Crowd. I embellished the top hat with a silk sash that I found in a remnant bin at Walmart for $.99. I purchased hat pins ($2.00) from Jo-Ann Fabrics and put beads on them that I already had. I used simple white paper to make the 10/6 card in the hat, and I placed some peacock feathers as embellishments also. For the hair and eyebrows, I tied yarn into the hat and combed it out to give it a frizzy look. The eyebrows were frayed out yarn, glued with eyelash glue. I found the Jacket($2.50), the vest underneath($.99), the button down shirt($2.00), the pants ($3.00), and the shoes ($6.00) at the thrift shop. The socks I bought at JC Penney (I got a good deal 3 pairs for $14) So I got 3 pairs and he chose two to have the mismatch look. I cuffed the pants to show the socks. The spools of thread for the thread magazine were spools that I already had at home. I tied yarn around them and made a sash for him to wear. The ribbons were also in my craft closet that I had leftover as well as the scarf and ties. I also had an old watch that I pinned to the jacket for a small detail. I found a thimble for $.29 at a thrift shop for another small detail. In the movie, The Mad Hatter has his finger wrapped, so we took tissue and wrapped it around his finger to emulate the character's look.

We won the best dressed couple costumes at the party we went to on Halloween. The prize was a golden pumpkin! Ha!! If anything, I hope others can get inspiration from our costumes and get ideas for next year! (But we also hope we win) We thoroughly enjoyed getting dressed up and getting into character. The costumes were very well received by everyone that we saw Halloween night. I encourage everybody to find inexpensive and creative ways to make these unique costumes instead of buying the generic costumes from the store. I spent less than $50 on both costumes together. It took me about a month to create the whole ensemble, although I did not work on it consistently, just from time to time. I probably put in about 28-30 hours total to create both costumes.