The Circus is in Town
by Shannon 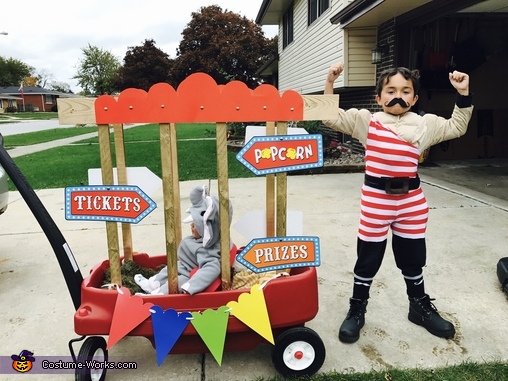 A word from Laura, the 'World's Strongest Man and his Circus Elephant' costume creator:

The idea came when my son found out he would be going to the circus for the first time! We were looking at circus pictures and he thought it would be cool to be the strong man and his sister the circus elephant. I instantly loved the idea since it incorporated a wagon to lug around a six-month-old baby! It was impossible to find a strong man costume so I bought a dress from the thrift store that cost me $2.99, went on YouTube and saw a short tutorial on how to make a jumpsuit. The muscle shirt I bought on eBay for $9.99. It's always cold in Chicago so he wore clothes underneath his costume. I stuffed his jogging pants pockets with cotton to make his legs look stronger. The belt came from an old pirate costume and the mustache was $1. The baby elephant costume I bought from a children's resale shop or $6.50. I got cheap wood from Menards that they were able to cut in thirds and hammered them to a top piece and bottom that held them together. I spray-painted the wood gold and put it inside the wagon. I saved grass from when I cut the lawn to put in there along with the peanuts which gave it a nice touch. I also bought a red posterboard and shaped it on top of the wagon I got it to stay on with thumbtacks. I put a colorful banner on the bottom of the wagon and cute signs which directed which way to go for drinks, sweets, popcorn, tickets, game etc. I put the baby's bumbo chair in there to secure the baby inside. We took pictures with many people and got so many compliments on it! It was so easy to lug around! My favorite picture is when the strong man is feeding his elephant peanuts and she's reaching for them LOL.