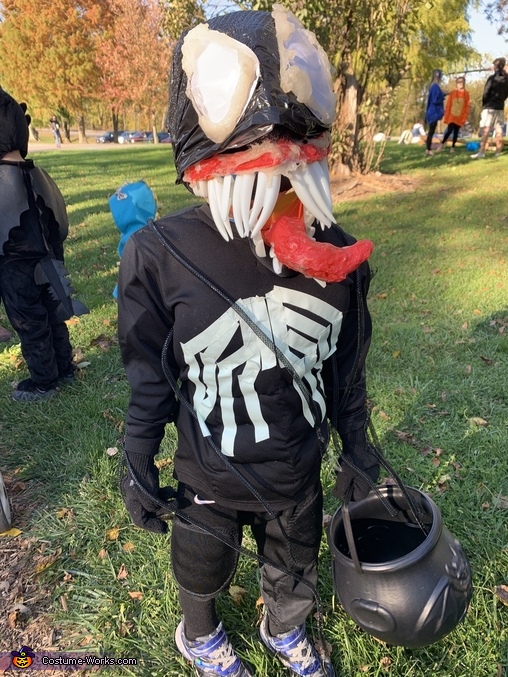 A word from Jasmin, the 'Venom' costume creator:

I have been making my son’s Halloween costumes since he was 1. He has been a Lion in a circus tent (1), Bob the builder and his friend Lofty (2), Pokémon Go Trainer (3), Dragon turning into Elsa (4), and Rocket Raccoon piggybacking off of Groot (5). This year he wants to be Venom. To be honest, I had no clue when he told me his idea. Thanks for the almighty google to make this happened.

This time we made the costume together. He made the request and even drew a design paper to show the details of the costume. We discussed every details along the way building up the costumes and of course watched a lot of YouTubers’ videos showing the professional way making Venom costumes. However we made this costume in a way appropriate for a 6-year-old boy skills. We tried to limit myself’s involvement unless he asked for.

1. Muscle suit. We studied the body muscle structure first and then he decided how many packs he wants to be, including the back muscles. We used a quilted puffer vest as the base and altered the back muscles. Then he sewed the size 6 puffer vest into the a size 10 compression sport shirt. Places the glow-in-the-dark tape in spider shape on the front. Last sewed the mesh tubing on the muscle suit and gloves.
2. Venom mask. After viewing many YouTube videos of homemade Venom mask, we made easy version Venom mask using three hats, a foam trucker hat (as front mask), a EVA foam visor hat (as moving jaws), and a black knit beanie hat (attaches to the mask for easy take-off and put-on). Cutoff the front foam of trucker hat, the mesh portion will be the bottom half where his eyes can see through from the mask and he can breathe and moves his jaws freely. Sewed the visor hat on trucker hat as jaw and upper lip. Connect the jaw to mesh portion of the trucker hat with hair bands, in this way when my son talks, the jaw will open and close slightly. Sewed the knit beanie to the mask so my son can put the mask on and take it off easily. Hot glued the googly eyes on trucker hat (We originally used a black plastic bag as a layer between the tucker hat and the googly eyes but after one day Halloween event, the plastic bag fell off. Therefore we removed the plastic bag and cover the trucker hat with duct tape and hot glued googly eyes on the trucker hat directly.)

Outcomes:
My son has been wearing this costume for the whole week going to contests and trick or treat events. One little girl was crying for 20 minutes because she thought Venom was a real monster. My son ended up taking off the mask and telling her he was not a monster. We also won two awards/prizes in our neighborhood.
The scariest costume at our local library
1st place at a costume contest in our neighborhood