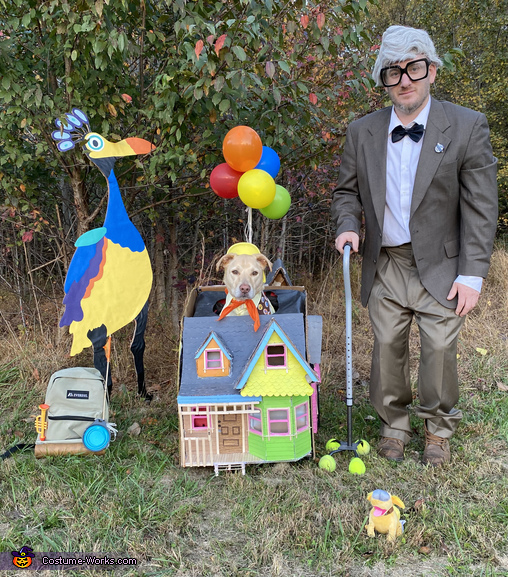 This homemade costume for pets entered our 2020 Halloween Costume Contest.

A word from Eric, the 'UP' costume creator:

Every year I come up with a costume idea to match my dog ( JD) This year I decided on Disney Pixar movie UP. I first came up with his costume who was Russell. I use a few stickers I printed out and made the sash for his out fit out of non-woven brown material. I bought a boys yellow dress shirt and then everything else I had laying around. For his backpack I used foam and some vinyl for the sleeping bad rolled up and the flag I cut and attached to a stick and got a party favor trumpet from Party City. After putting his costume together I came up with the idea to turn one of is his bike trailers into the the UP house. I first drew what I had in mind then went to town using cardboard to make the house so it would attach to the cart. Everything was done by hand and cut out. I used paint, hot glue, tape, Velcro, pop icicle sticks and some magnets and just acrylic paint.For the balloons to stay I used a fiberglass pole for the snow plows to see and painted it white. For my outfit who is older man Carl: I had two suits and chose the pants from one and the jacket from the other. I had a bow tie at the house and bought a wig and glasses. I painted the wig to make it look white. I took my grandmothers cane who is passed away so i didn't take it from her haha ( and added my tennis balls I had that I play with my dog. Kevin the bird, I used cardboard and vinyl from my job. I drew him out first then cut all the vinyl pieces out and glued them to cardboard. I think I covered it all.