Trick R Treater Who Ate Too Much Candy Costume 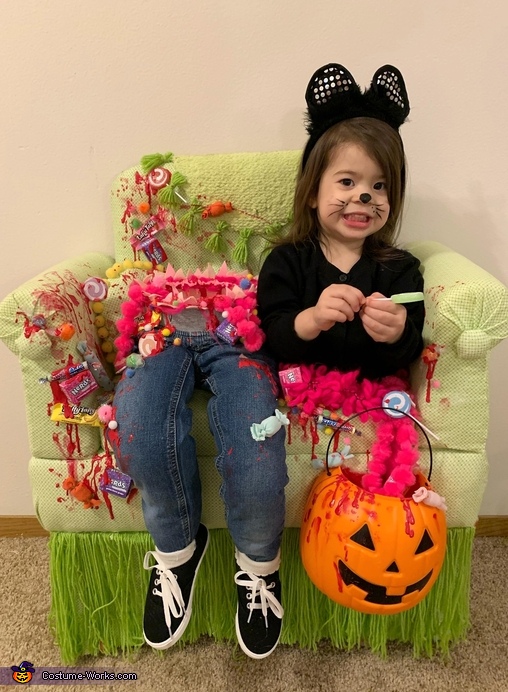 Trick R Treater Who Ate Too Much Candy Costume

A word from Angela, the 'Trick R Treater Who Ate Too Much Candy' costume creator:

The girl in the costume is my two-year-old daughter, Natalie. I was originally inspired by a character from the movie "Beetlejuice". However, I thought it would be fun to create a scene related to Halloween, so I thought of a little trick r treater who couldn't stop eating candy. The back part of the couch opens up so my daughter can slip into an opening. This backing zips closed and remains secure. The costume moves with my daughter as walks because it has 4 castor wheels on each bottom corner of the couch frame. The wheels are attached to a simple frame made from wooden dowels. The couch is made from cardboard, foam pieces, fabric, and lots of hot glue. I used a small bucket to hold the opening of the pants up and open. So, the "guts" area also serves as a candy bucket! The jack o' lantern candy bucket was cut in half so it could be glued to the front, but it also functions as a treat bucket - for double the candy! The legs were made with kids' pants and plastic bags I used as stuffing (much more lightweight than pillow/cotton stuffing). I wish I could submit a video file for the contest because one of the best things about this is seeing her wheel around. This was SO much fun to make and my daughter had a blast wearing it :) She got a lot of great responses this year from kids and adults.