The Very Hungry Caterpillar
by Crystal

The Very Hungry Caterpillar
by Sophie 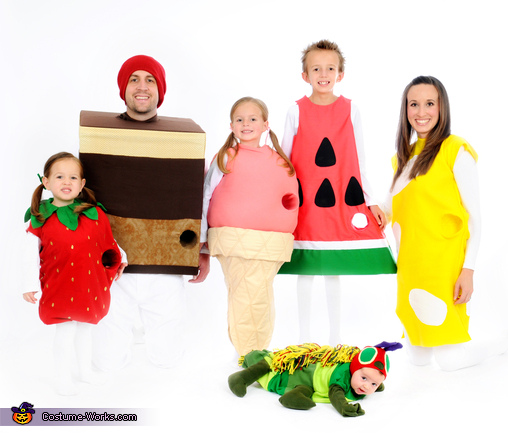 A word from Shanda, the 'The Very Hungry Caterpillar' costume creator:

We do a family theme every year and this years theme was inspired by the book "The Very Hungry Caterpillar" by Eric Carle. The costumes are all handmade, without patterns, trying to follow the illustrations of the book. The baby is the caterpillar who ate through the strawberry, the piece of chocolate cake, the ice cream cone, the slice of watermelon and the slice of swiss cheese. The holes were the hardest part to make. I used old peanut butter jars (plastic) and based on the width of the costume sometimes duck taped two together and covered them in fabric and glued them in- sounds easy, but it was pretty tricky. The tricky part comes in cutting a hole in your costume to put the peanut butter jar in. If you put your costume on the ground and cut a hole straight through it won't lay the same way once the costume is on. So you'll end up having to cut an angle on the peanut butter jar to get it to fit just right. Tricky, but it's cool because you can actually see through the holes. The cake is a box with holes cut in it for the arms and head and fabric glued onto it (red snow hat for the cherry on top). The ice cream scoop is separate from the cone in order to put it on. The cone holds its shape with a foam wreath on the inside. They stick together with velcro. The ice cream scoop is the top half of a womens dress, stuffed with batting. I machine quilted the cone to put the lines on it. The watermelon slice has cardboard in the bottom to help it hold it's shape but still allow him to sit down. For the caterpillar I made a "bunting" for the baby, with various green fabrics (old t-shirts, etc). Used yarn for the fuzzy on it's back, and that's where the costume opens up to put it on (with velcro). I then made a hood and stitched on the antennas and eyes and nose. The costumes probably cost around $20 but that's because I had the box on hand as well as a lot of the batting used to stuff the strawberry and ice cream cone, and got a lot of the fabric for free (re-cycled clothing from a clothing swap I go to every year and made it into costumes!)