Thing 1 and Thing 2
by Monica

Cat in the Hat
by Jessie-rae

The REAL Cat in the Hat Costume 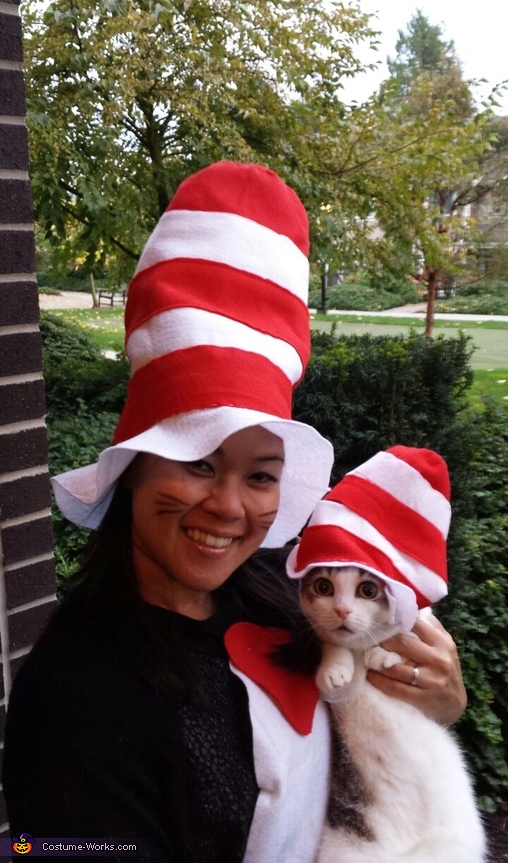 A word from Rosanna, the 'The REAL Cat in the Hat' costume creator:

Photo #1 My cat Pixie and I are wearing the "Cat in the Hat" costumes. Our costumes are hand-made. For the hat, Measure your head and your pet's head. The circumference of the head will be the length of the strips. Cut out approximately 3"inches width(for the adult version)/1.5"inches width (for the pet version)of red (3 strips) and white (2 strips) felt fabric. Then using the same head measurements, cut out a piece of string with that length. Form a circle with the string and place it on a piece of red felt and white felt. Trace the circles with a felt marker, then draw a bigger circle approximately 1"inch larger than the original circle. You now have a smaller circle and bigger circle. Cut out the larger circle, then make 8 cuts between the large circle and small circle. Look at image #3 and you will see an example of this. This creates the top and brim of the hat. For the Cat in the Hat shirt, draw a big bow on red felt and large oval on white felt. Pin these pieces on a large black sweater. Voila, instant Cat in the Hat!

Photo #2: Pixie posing beside the two "Cat in the Hat" Hats: Cat version and Adult version

Photo #3: Pixie is sitting beside her "Cat in the Hat" Hat displaying how the how is sewn on the inside

Photo #4: Just Pixie in the Hat

Photo #5: Hugo the Frenchie in the Hat with Pixie sleeping in the background