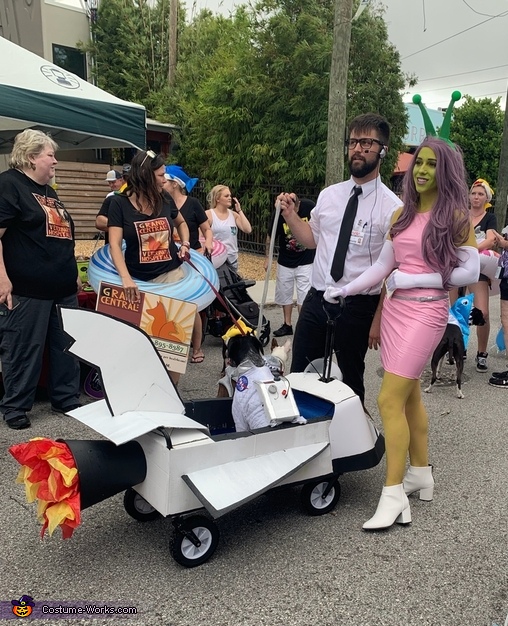 Nova riding around the pet PAWrade,

A word from Ashlee, the 'Super Nova' costume creator:

Hey guys,
My names Ashlee! Earlier this year my husband and I rescued the missing piece of our family. The shelter named her Star, but we wanted to give her a fresh new start. Loving the space vibes we went with the name Nova. Super Nova the Space Pup.

So it was a given that our first Halloween as a family would be space themed! We wanted to do a bit of a throw back and went for 1970's Nasa.

COSTUMES
NOVA - THE ASTRONAUT
I made Novas space suit out of some white quilting fabric I purchased from Joanns for about $4.00
I've never made clothing for a animal before, it was challenging to get the arm holes correct!
I bought an American flag and Nasa patch for the sides $4.00
I had all the trims at home already.
I used a Truly seltzer water box I pulled from the recycling at work for the base of her pack, on it I glued anything in my house that looked like buttons and knobs; toothpaste caps, water bottle caps, old phone chargers, a computer fan. Her air tank is a mini water bottle and a old air hose from my Father-in-laws CPAP machine!. Besides some paint (which I already had) her pack was free to make.

THE SPACE SHIP
We planned to go to lots of dog friendly Halloween events in our area, we wanted Nova to have a place that was hers and could lay down and snack on her treats. What better way to do that than build her a Space Ship!
We borrowed a wagon from a family member and again lots of cardboard from my job. I just looked at photos online and tried my best to create a comparable shape on the wagon. I did have to buy 2 pieces of white poster board for the nose of the ship - $1.00
Her "blaster" in the back is the mini trash can from my bathroom and some tissue paper!

AARON - MISSION CONTROL
As I mentioned before we were inspired by the 1970's Nasa look. He simply wore black pants, a white dress shirt, and black tie. We popped the lenses out of a old pair of sunglasses and actually still had a old headset with mic. Only thing that had to be purchased was printing his "Nasa ID", my printer decided to not work that week!


We had so much fun dressing up and getting to spend the day with our pup. Everyone loved her and wanted to snuggle, she got so much love that day! We took countless photos with people and gave so many little kids high fives. One little boy wasnt sure what Mission control was, Aaron sat and chatted with him for several minutes about it, after the boy decided he'd like to work for Nasa. Who knows, maybe we'll see him on Mars one day.

I believe the best category for our submission is Themed Family