Scout Russell from Up
by Adanel

Russell from Up
by Liza

Russell from Up Baby Costume 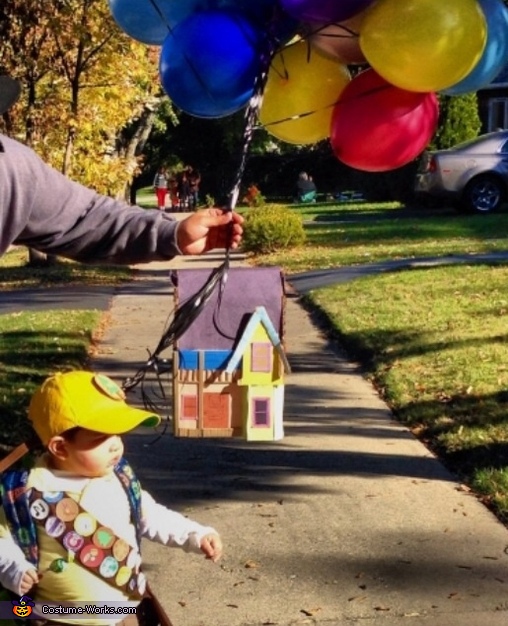 CJ looking at people that are laughing.

A word from Diana, the 'Russell from Up' costume creator:

My little toddler CJ is wearing this costume. The idea came to me a month ago while trying to convince his father that I could crate something from scratch without it costing too much and still making it "cool". We both love Disney Pixar movies and Up just seemed to suit him best. He pretty much looks like Russell. Putting it together was pretty simple. Only thing we had to by at a children's clothing store was the yellow hat and polo and the boots. The box my boyfriend ( his father) brought from work and we constructed the house from scratch. Construction paper, glue, foam sheets, and an eye for detail made it possible. My sister was kind enough to make us his sash and my boyfriend made the patches including the most important badge of all; the Ellie badge. The day of trick or treating in our neighborhood we bought the balloons and took off. Needless to say we got reactions right away. People were in complete awe over it, asking us for permission to snap his picture, and CJ was such a good sport. The house and balloons were attached to his book back and we had to hold it up as he walked since it was so windy. Still, all went without a hitch.