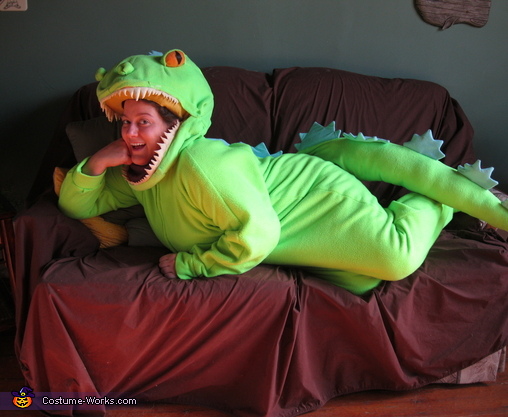 A word from Amanda, the 'Reptar' costume creator:

I am wearing this lovely rugrats Reptar costume that is handmade from teeth to tail. In whole the project took me 25-30 hours of fun creativity. I came up with the idea after having made some muppet-like puppets for a class. I molded the teeth out of glow-in-the-dark, polymer clay, while most of the rest is made out of fleece and other scrap fabrics. I designed the head and tail myself and used a jumpsuit pattern for the body piece. I also carried around a portable ipod speakers in an added pocket which played the Rugrats theme song. Most of the costume is sewn though hot glue was used for some of the attachments.