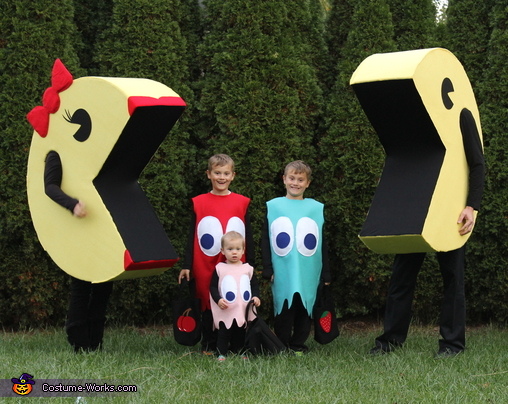 A word from Katy, the 'Pacman Family' costume creator:

We wanted to come up with an easily recognized, fun family group costume idea that our 6 year old twin boys would like and our 18 month old daughter would actually wear. We also wanted something sort of simple to pull together, but something we could still add some flair to and of course we love to DIY so store bought costumes were out of the question. After we sifted through a bunch of ideas and briefly toyed with just having the kids dress up, we landed on a family Pacman theme.

For the ghosts we used felt, polyfil to create the ghost costume foundation (I used one of the my kids' tshirts to create a pattern that would fit, it took me once or twice to get it right). The ghosts costumes are sewn, with a velcro closure at the shoulder to allow us to attach battery powered LED rope lights to the inside that we could turn on and off with a remote control. We set them to blink just like the ghosts from Pacman (you can't tell from pictures obviously, but it was great!) For the giant Pacman and Mrs. Pacman we used refrigerator boxes, taped together with gorilla tape and then covered with a layer of felt and then a layer of fleece (attached using many sticks of hot glue). All the details to the pacmans were cut out of felt and hot glued on. We used a black fabric to cover the mouths that was sheer enough for us to see through, but looked dark enough that most of our neighbor kids were asking "how can you see?!?! on repeat--lol! My husband streamed the pacman music as we walked along which was a brilliant touch

The most expensive part of our costumes were the rope lights--about $20/set. Other than that we spent about $50 on fabric and got the boxes for free.

We had the best time walking around our neighborhood and got stopped for pictures quite a bit. Yeah for Halloween!