Off to the Races! Costume 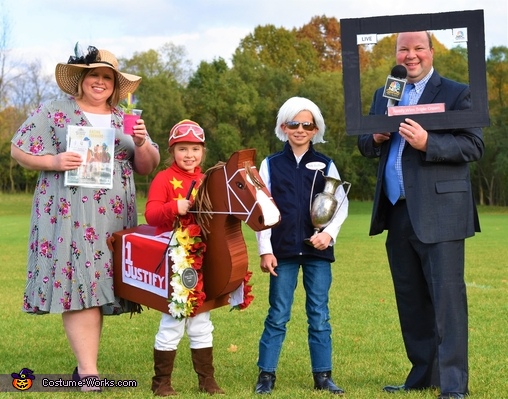 A day at the race track.

A word from Lindsay, the 'Off to the Races!' costume creator:

This group costume celebrates a day at the race track and commemorates Justify clinching the Triple Crown with his victory in the Belmont Stakes in 2018. It features all the iconic figures of the day: a cocktail sipping race fan clutching her race program and betting ticket, the ever-present sports media, Justify's legendary trainer Bob Baffert, and of course Justify and his jockey.

Over the years our family has had a casual interest in horse racing, usually making a point to tune into the major events such as the Kentucky Derby, the Preakness, and the Belmont. When our summer travel plans had us passing through Louisville, Kentucky, we decided to plan a stop at Churchill Downs. Little did we know that that tour would spark our children's passion for horse racing to the point that they spent the rest of the summer riding their bikes around the driveway loop wielding twigs as crops and pretending they were jockeys in a race.

The excitement over the trip to Churchill Downs together with my burgeoning collection of appliance boxes that I was sure would come in handy someday is what gave rise to our family costume. My 8-year-old daughter is the jockey, my 10-year-old son is dressed as Bob Baffert, and my husband and I are the sports reporter and the race fan.

Several boxes were harmed in the production of this costume. I can never resist the opportunity to take a cardboard box and make it into something unexpected, so our costume plan centered around the horse, which was fashioned using the packing material from a new dishwasher, plus box cutters and a lot of hot glue.

I drew the horse head and neck onto some flat cardboard and cut out two of them, fastening them together with a strip of cardboard into between to give the head some dimension. The head is removable and attaches to the box with simple cardboard slits reinforced with flat craft sticks. I then painted the box and the head to match Justify's chestnut color and large, white blaze.

Once the head was dry, I drew on the details of eyes, nostrils, and jawline. Brown raffia was used for the mane, forelock, and tail. White shoelaces were glued into place to replicate the racing bridle. I used felt to make the saddle blanket, complete with Justify's name and the number signifying his post position in the Belmont. We made a blanket of flowers for Justify using a felt background and artificial flowers from the dollar store. We made a point to use the official flowers of each of the races that comprises Triple Crown: red roses for the Kentucky Derby, black eyed susans for the Preakness, and white carnations for the Belmont. There are crisscrossing elastic straps inside the box that go around the waist of the jockey to hold the horse in place without the distraction of shoulder straps that would detract from the jockey's flashy silks!

Speaking of the silks, the next phase of the costume build required a trip to the thrift store where we found white baseball pants and a red turtleneck for the jockey, and a blue vest and a pair of dark glasses for Mr. Baffert. Felt stars were glued to the turtleneck and the jockey's cap to match the silks that Justify's jockey wore in the real Belmont race. We affixed a name tag and "Baffert Racing Stables" logo to the trainer's vest. Mr. Baffert's shock of snow white hair is one of his most recognizable features, so I purchased an inexpensive wig online in an attempt to achieve the same effect. Mr. Baffert's other props were gathered from things we had around the house: a dog leash to be used as a lead rope and a trophy to signify his success.

You can always count on the sports media to cover every angle of race day, so my husband posed as a sports reporter. More cardboard was recycled into a TV screen, and his microphone was crafted out of a wrapping paper tube, cardboard scraps, and a tennis ball covered with felt.

No race day would be complete without a throng of cheering fans, so I got in on the costume fun by dressing as an enthusiastic race goer complete with oversized hat, race day program, and betting ticket. I even made myself a faux cocktail by painting the inside of a plastic cup and adding a straw and garnish to look like a "Belmont Blush", which is the official drink of the Belmont Stakes race.

We took great care to be true to all the details of the Belmont Stakes, and as a family we had great fun dreaming up and putting together this costume. We look forward to showing it off to friends and neighbors for Halloween this year.

We're sure that there are plenty of other incredible costumes that will give us "a run for our money", but now that we're in the "homestretch" we hope to be a "front runner" in this contest and think that we will be your "across the board" favorite, so "riders up" for a happy Halloween, and we'll see you in the "Winner's Circle"!