Oblina and Krumm
by Shelby

Crum and Oblina
by Jessica 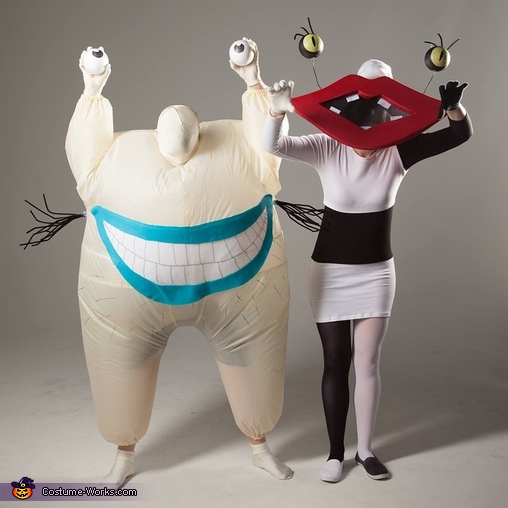 A word from Ruby, the 'Oblina and Krumm from Ahh Real Monsters' costume creator:

My boyfriend and I decided to dress as Oblina and Krumm from one of our favorite 90's Nickelodeon shows, "Ahh Real Monsters."

My boyfriend dressed as Krumm (the guy holding his eyeballs with his hands.) His base was built from a suit with a fan to inflate it. We bought blue and white felt to make his very large mouth. It was secured to the suit with clothing double sided tape. His eyes were made with permanent marker and styrofoam balls.

The armpit hair was a bit harder. He used black pipe cleaners to make them, however it's too heavy to tape and we couldn't use hot glue since we didn't want to burn holes in the suit. He ended up using magnets to secure them. Hot glue was applied to the pipe cleaners and a magnet. Another magnet was placed inside the suit to keep it in place. By doing it this way, we were able to have the hair stick out like the character's does.

My costume (Oblina) was a little more detailed. For the dress, I took two long sleeve shirts (one white and one black) and cut them in half. I then hemmed them together to make her thick stripes. The sleeves were the hardest part of that, since its such an odd shape in the shoulders.

For the legs, we bought two pairs of tights (one white and one black) and cut one leg off of the black. I put the white tights on first and then slipped on the black leg. The forehead was made with a couple hats sewn together and stuffed with the extra felt we had from Krumm's mouth. The eyes were made with a wire coat hanger hot glued/taped to a headband with painted styrofoam balls at the end. Black pipe cleaners were attached to make the eye lashes (they were also attached to the top of the hat, but you can't see them in the image.)

The lips were the most complicated part of this costume. We bought a piece of insulation foam and carved out the shape. We then sanded it down to create dimension and painted it red. I then glued on the teeth (made with the white felt) to the back of the lips. After that, we stapled on the black back piece (made with the other leg cut off from the tights.)

And lastly, we bought white and black gloves and a pair of white slip on shoes which I painted one of them black.

I'd say it turned out pretty well!