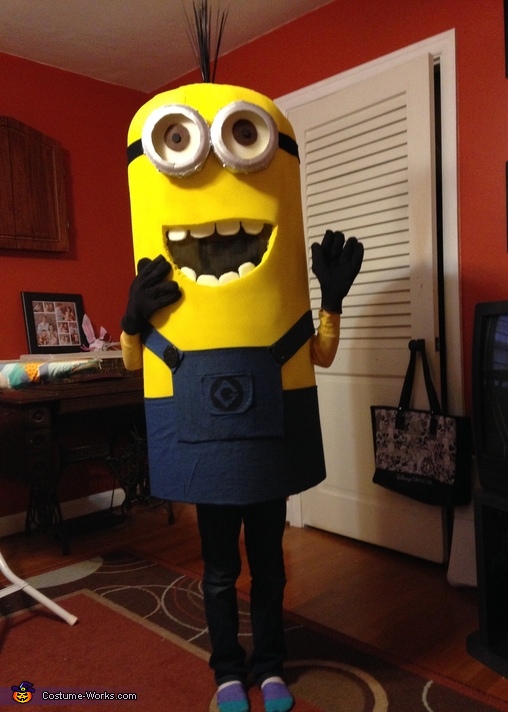 A word from Kevin, the 'Minion' costume creator:

This is my Daughter Caitlin's costume!
She has asked to be a Minion for Halloween, and after being disappointed in the choices available in the stores, I decided to try my hand at making a costume! I researched on online and found others who had already done the same, but ultimately decided to use an Egg Crate Mattress Topper ($12). I cut the top edge with a pattern to fold in the top flaps and then hot glued them into place. I then hot glued a Velcro strip down the back opening. I cut a hole on each side for her arms and we had our first fitting where I then cut the mouth to be right in front of her face so she could see out. On the top of the Minion there was a star shaped opening left. I traced a circle onto the top and then cut it our leaving an opening. I used the same circle to then trace and cut a piece out of some of the leftover foam and hotglued it into the hole, hotglueing another piece to the inside to reinforce it. For the hair, I used black zipties that I pushed through the top one by one and then hotglued them to the inside to hold them in place. The teeth were carved from left over foam and hotglued into place. Inside the mouth, I used a black shelf liner as a "screen", so she could see out, but not be easily seen from the outside. For the goggles, I used paper salad plates and a piece of posterboard cut into a strip and glued to the place. I cut the outer rim of the plate off and then snipped around the next ring and folded the tabs in to glue the posterboard strip to. I cut out the inner ring of plates and then glued them together. For the "bolts" of the goggles, I glued "googily eyes" evenly spaced and glued to the outside. The eyes are leftover foam with a piece of brown felt and small black foam for the pupils and iris. I glued another small piece of foam to the back of the eyes to help give them more of a "rounded" look once the goggles were glues to the body. I did have to shape the posterboard part of the goggles to fit the rounded body, and then the goggles got painted. For the goggles strap, I cut the bottom of a black T-shirt off and just fitted it over the body. Everything was then hotglued into place. My wife helped with overalls and cut and sewed them together and then again hotglued them into place. I constructed the buttons on the overalls from foamboard covered in Duck Tape and then punched holes in them to make them look like buttons. The "G" for Gru was just a Sharpie on the fabric of the fake pocket she sewed to the front. We also had a pair of fabric work gloves that we sewed the fingers together to give the appearance of only 3 fingers like a real Minion! After that, the rest was easy. Yellow long sleeve shirt and a pair of jeans! It was great on Halloween and we got stopped by tons of people to take pictures and to see the "Real Minion" Total cost including fabric for this costumer was under $35!