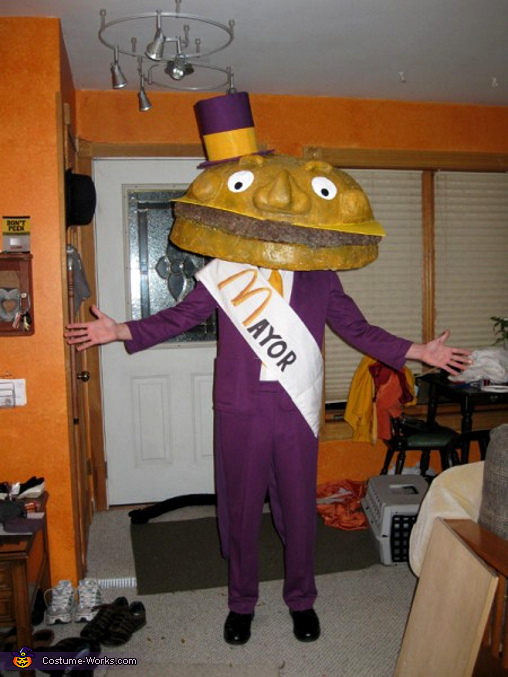 This is a Handmade Costume by Michael. He is also the person wearing the Costume... as Mayor McCheese.

Great looking Burger Michael!
Thanks for your entry. Ü

This homemade costume for men entered our 2009 Halloween Costume Contest.

A word from Michael, the 'Mayor McCheese' costume creator:

I purchased the purple suit for this Mayor McCheese Costume at my local Goodwill, they have great clothing for costumes. I made a tie out of some yellow fabric and also used the same fabric for the yellow rim on the hat. The hat itself is just cardboard, wrapped in the fabric, I used hot glue to attach the fabric to the cardboard.

The sash I created from some simple white fabric. The "M" on the sash I made using Prismacolor markers. I considered the t-shirt screening sheets to do this, but decided to go with the prismacolor route.

I started by creating the shape of the head using cardboard. The next step was to cover the whole thing in foam. In retrospect, I should have used either some AB foam or just bought a block of sculpting foam, but for this one, I used a few bottles of "Great Stuff Big gap" foam, found at my local hardware store. The next step was to cut and sand down the head, into the shape I wanted. I created the cheek bumps and nose separately and then glued them on. I then did 3 layers of a latex primer, and then did a base coat of a bun brown color. I then took my airbrush to it, adding some lighter and darker areas, to give it some depth. Next was the brown meat patty, also airbrushed with detail. I then painted the eyes on, and then sealed it with "Krylon triple thick". The bottom of the head (not really seen in the picture) is some fabric that was stretched, stapled, and painted. I mounted a construction helmet onto the inside with a small screw and more great stuff foam. Last, I glued the hat to the head.

For vision, there is a slit right under the meat patty, and another slit in the fabric on the bottom, giving enough vision to move around with no problems.