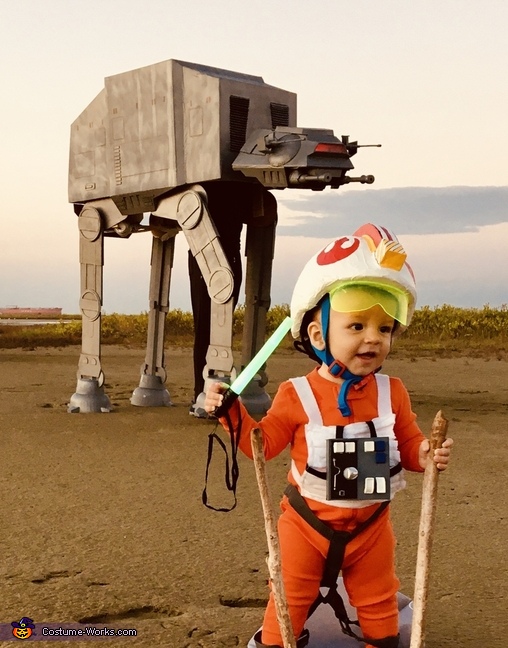 A word from Daniel, the 'Luke Skywalker and AT-AT' costume creator:

We made the Imperial walker using cardboard over a wooden frame. I measured the dimensions for the AT-AT off a picture and then converted them to a size that would fit two people walking underneath it. The base of the frame was made from some plywood I had laying around, the rest of the wood was found in a dumpster. After making the frame, I started cutting pieces of cardboard we collected from the recycling center to make the outer shell. I'm 6'2" and my wife is 5'0" so I needed to make a drop-down section where the costume would be resting on her shoulders and still be level with me in the front. I then used some old curtains to make the straps that rested on our shoulders. This left our hands free to move the legs and deal with getting Luke Skywalker (our 9mo old son) hooked in underneath.

The legs were two pieces of wood with a jewelry box hinge for the knee. I then wood glued some heavy duty cardboard directly to the wood and added some detailing. The feet are Ziploc containers and popcorn bowls from the Dollar store, the toes are made of cardboard. The shoulders were velcroed on so we could get to the bolts that connected each leg to the frame since we needed to remove the legs to transport it anywhere. I initially tried to make a contraption to hook the costume's feet to our own, but it was easier and looked better if we just moved them with our hands.

The head is the most detailed part on the costume. The discs on each side are colanders from the dollar store I cut to size and taped over to smooth them up. The smaller guns on the side of the head are some antennas, camp chair frame, and some broken internet router bits (all from recycling center) some unused breast pump parts, and cardboard. The larger guns underneath are metal broom handle, vacuum attachment, pool noodle, salad dressing bottle, a couple tuna cans, and more breast pump parts. The window out of the head is some plexiglass I had laying around which I scuffed up to disperse the light coming through. I put a red bike light inside to light it up. If you look carefully in some of the pictures you can see the Lego man who in at the helm. I attached some high test fishing line internally and ran it through an eye-bolt in the neck so I could make the head turn left and right from inside the costume. The neck is a 6" dryer vent hose which we velcroed to the head and body so it would turn with the head but still be detachable when we needed to take the head off. The top box on the head can be opened up so I can turn the bike light on and off easily. We also put a bluetooth speaker inside the head so we could blast "The Imperial March" as we walked around. That was $1.39 well spent at iTunes.

The little guy's Luke Skywalker costume is an orange pajama onsie. The white vest is made from felt we had with velcro to get it on and off easily. The control box on his chest is cardboard with some random bits we thought looked good from the recycling center. The helmet is his normal bike helmet with a cardboard mow-hawk, covered in tape, then spray painted white. My wife hand painted the detailing. The bright green visor is a vitamin bottle that I cut and then heated in water to shape properly. His lightsaber is a flashlight/glowstick combo we found at Marshal's. I put some electrical tape over the flashlight end to give it a better looking handle. He hangs under the AT-AT in a baby carrier you would wear on your chest that I attached with some rope.

Everything else we either had or got for free from the recycling center.