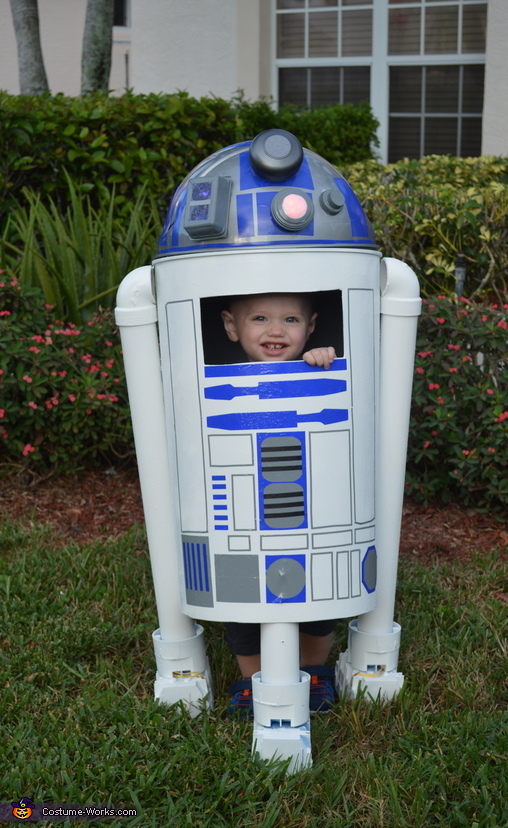 A word from Jessica, the 'R2D2' costume creator:

May the Force be with you this Halloween! Our one-year-old Star Wars fan loves playing with his big brother's R2D2 toy and laughs at the sound effects, so we decided he would make the perfect life-size R2D2 for Halloween.

To make it as fun and realistic as possible, we added red and blue light features, as well as a Bluetooth speaker (the grey circle) to the top. We linked the speaker to a smart phone, which allowed us to not only control R2D2 sound effects, but also play the Star Wars theme song. When we approached a new group of people, we would blast the theme song, and then when people spoke to him or commented on his costume, we would have R2D2 reply with various "beep boop" sound effects.

The base of R2D2 is a silver swing-top plastic trash can. We cut out the bottom, spray painted the bottom part white, and kept the top silver. The "arms" are made from PVC pipes and the feet are spray painted electrical covers with casters so it can roll. Originally we had him just walking in the costume, but to cover more ground on Halloween, we attached a board to a small three-wheeled furniture dolly and connected it to the three feet. This allowed us to push him around trick-or-treating, and we also had added a parent handle on the back to help steer.

All of the decals were made out of vinyl using a die-cutting machine (and a whole lot of math to make them all accurately fit). The top design is also vinyl, the Bluetooth speaker, battery-powered red and blue lights, and spray painted bottle tops.

The Force was strong with our R2D2 costume, and our little guy had a blast!