Game of Thrones Group
by Paul

Khaleesi and Khal Drogo
by Ashley 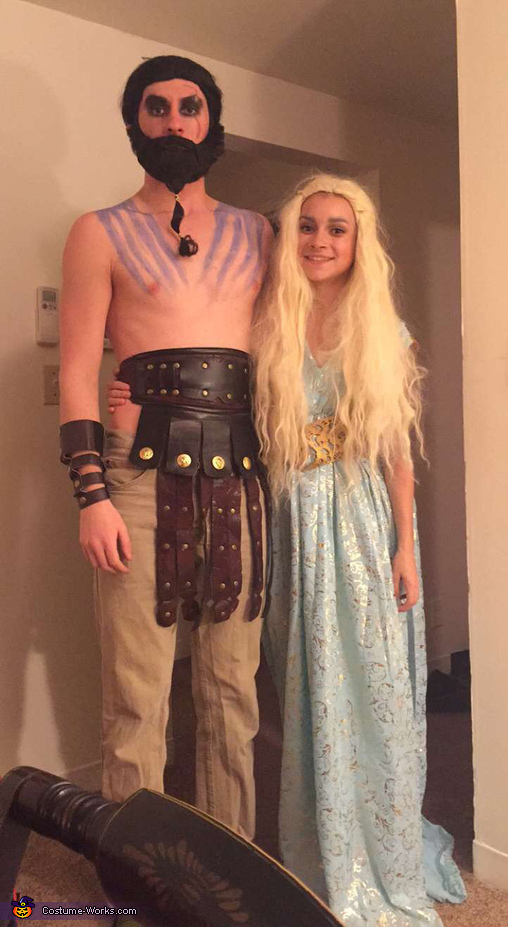 A word from Carly, the 'Khal Drogo and Daenerys Targaryen' costume creator:

My boyfriend really likes Game of Thrones and actually has a celebrity crush on Daenerys (haha) So for fun, we went to a Halloween store to try on costumes and I came across a "goddess" costume that looked very similar to that of Daenerys. I tried it on to be funny, but found it to be very pretty. With that being, we decided to be Khal Drogo and Daenerys.
For my dress, as I said, It was a goddess costume that resembled her dress. I ordered a long, wavy blonde wig and braided some hair to the back to create one of her usual hairstyles. I kept the makeup very neutral and since I have very dark hair, which makes my eyebrows dark as well, I covered my eyebrows with white eyeliner and then went over that with a taupe eyeshadow to get her grayish color.
For my boyfriend, we shopped in the "Roman warrior" section of the store. His belt and wrist guards are for a Roman costume. His beard and long pony tail was made specifically for "Khal Drogo". I used black eyeliner and eyeshadow for his eyes, and for the scars, I glued part of his eyebrow down so that I could put foundation over it to create the eyebrow-part of the scar. I used pink and brown lip liner to draw the scar above and below his eye. His war paint is just blue body paint that was applied by a paint brush.