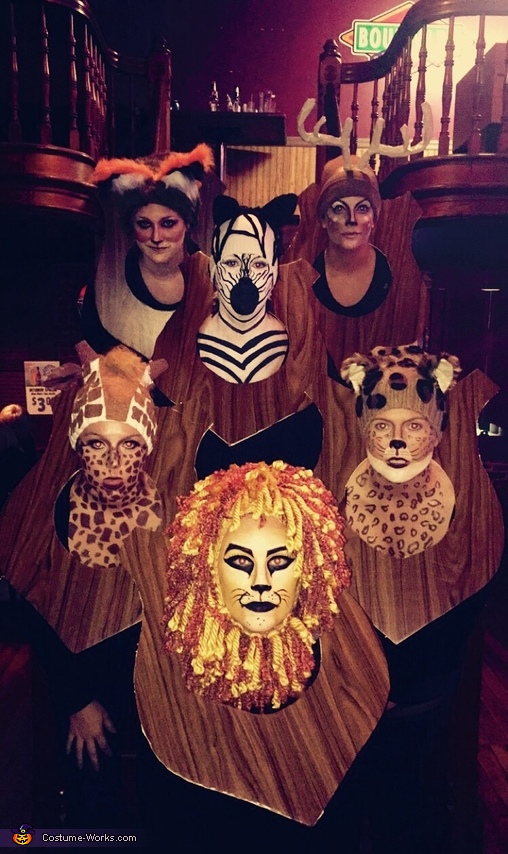 You wish you could mount these trophies

This homemade costume for groups entered our 2015 Halloween Costume Contest, in the Best Group Costume nomination!

A word from Jenna, the 'Hunter's Trophy Wall' costume creator:

This year, our group of friends dressed up as a hunter's trophy wall. Growing up in a rural area, this time of year is known mostly for hunting season. We were further inspired by the recent events with Dentist Walters and Cecil the lion. Supplies included foam board, wood contact paper, felt, headbands, beanie hats, face paint, foil, paint, faux fur, styrofoam cones, plastic flower leaves, and yarn.

How to instructions:
Lion: the lion's mane was made by crocheting yellow, tan, and brown yarn.
Deer: the deer antlers were made with aluminum foil wrapped with tape and then painted light brown. The antlers were screwed on to a headband.
Giraffe: the giraffe's horns were made using styrofoam cones painted with brown fabric paint. We then glued felt spots and faux fur to the beanie hat. The ears were added last and were made from faux leaves painted brown.
Fox: the fox ears were made by wrapping orange faux fur around a hanger shaped as ears. Black and white faux fur were also added to the inside. The ears were then hot glued to a headband.
Cheetah: the cheetah head piece was made by glueing black and brown felt to a beanie hat to achieve the cheetah spot look. The ears were purchased online.
Zebra: the zebra hat was made by glueing black felt stripes to a white beanie hat. Black and white yarn were cut and hot glued to the hat for the mane. The black ears were made with felt and glued to a headband.

The costume really came together with the face paint. We used Wolfe face paint and painted each other's make up for approximately 6 hours. The trophy plaques were cut from foam board, and the wood contact paper was added to the brown foam board to obtain a natural wooden plaque look.

We had a lot of fun in the costumes and received a great responses from the crowd. Many people wanted pictures to send to their friends and family who were unable to attend because they were hunting over the weekend.