How to Train Your Dragon
by Aubry

How to Train Your Dragon: Hiccup, Astrid, and Toothless
by Lauren

How to Train Your Dragon 2
by Elizabeth

How to Train Your Dragon Hiccup Costume 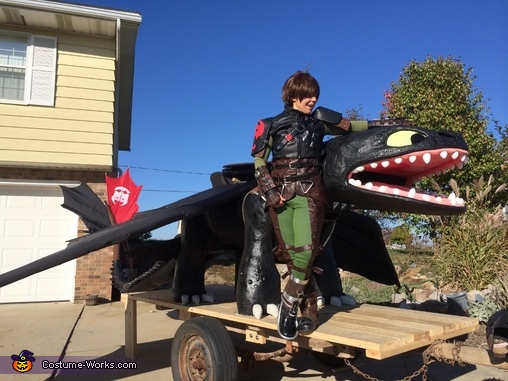 Hiccup from How to Train Your Dragon 2

A word from Jenni, the 'How to Train Your Dragon Hiccup' costume creator:

I am wearing the costume...I came up with the idea after watching "How to Train Your Dragon 2" I absolutely love Toothless!!! I so wanted him to be real! So I talked my sister, Pam, into helping me make him life sized!! The first thing I did was start with my costume of Hiccup. I went to Goodwill and found a black leather jacket. I cut it short and cut the sleeves off; then used the belt for the straps on the arm guards. The arm guards are made from the lower part of the sleeves and craft foam wrapped with foe leather. The left arm guard holds a small fake knife and the other holds a compass made from a few parts I found at Hobby Lobby. It was then glued to a band that fastens with velcro. The shoulder guards are made from craft foam wrapped with the upper arm part of the jacket. The Viking symbol is made out of craft foam also. It's amazing what you can do with hot glue and gorilla super glue! I really don't sew that much so this was a challenge :) I did however sew part of the shoulder guards on by hand along with gluing just to make sure they wouldn't fall off. The helmet is made entirely out of craft foam with an impression of a dragon symbol made from a pencil. I found out how to make a helmet on You Tube :) The foe leather chaps had to be hand sewn on me with the help of a friend and my sis. The vest was sewn by a friend with a sewing machine. The boots are made from an old pair I had that I sprayed and added craft foam to make them higher. One is wrapped with different kinds of ribbon and the other has a wine opener gadget on the front, tin lining the top and bottom, and silver spray painted tubing to look like Hiccups prosthetic leg. The belts around the waste were purchased at Walmart. The belt across the chest was purchased at Goodwill, and the dragon symbol on the belt across the chest was made from craft foam. The wig was purchased online.
The dragon is made from a donated sheep trailer that was in my uncles barn for years :) He is a tire salesman though so he put new tires on it for us. The inner structure is made out of 2x4 and 2x6 boards, metal lath, paper mache', and paper clay. The eyes are done with pastel on poster board domed with resin. The tongue and gums are made out of soft foam dipped in paint. The teeth are made from paper clay coated in plasti dip. The nails are paper clay as well. The wings are made from nylon fabric hand sewn on a wooden frame covered with pool noodles. The tail is made in the same fashion paying special attention to include the prosthetic side like the movie. The harness was made out of tubing around the shoulders and more craft foam. The body is coated in rubber coating much like the teeth.
I would say that the costume was 95% done by me. The dragon was 100% my idea roping my sister into helping me make it :) I would say I did most of the formation of him but Pam helped me with a lot of it.....took us 2 weeks of 16 hour days almost solid to get him done in time for a parade before Halloween to show him off. My sig. other Keith put a lot of time into building the infrastructure for me and making it so when you sit on the saddle the wings move up and down! We also created a space in his chest to put a fog machine with a tube leading through his throat to come out his mouth....we also put a blue led light in his throat and a mini strobe light to look like he is spitting lightning! I have made up my own costume before and Pam and I have dabbled in sculpting but this by far was a crazy project!! It was awesome and stretched our imaginations. It ended up costing around 600.00 not including labor. Everything we did, we tried to do true to the movie....we spent a lot of time measuring toothless on the first movie and on a model to try and get him right. And I did the same with Hiccup's costume what I could find on the internet.
Well, that's my entry. Thanks for letting me share! I hope you like it!! :)