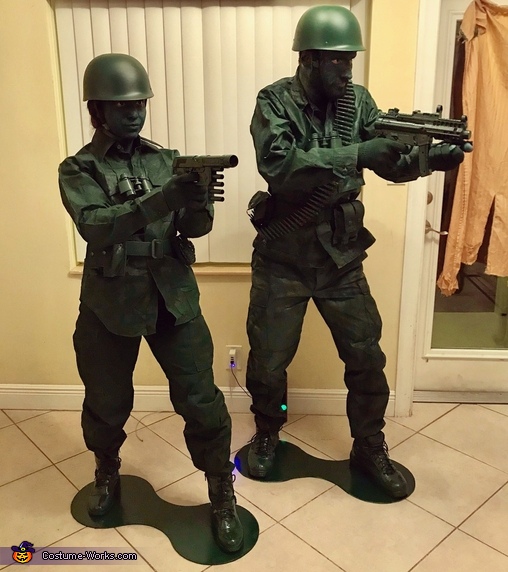 Everyone wants to have a Halloween couples costume with their special someone. This year was no different and these costumes were a blast to put together, with a lot of work put behind it.

One night, after watching the nostalgic, "Toy Story", with my boyfriend, we instantly knew what we would be marching around in for Halloween. The question was - how? Well, the first thing we did was create a list. A list of items we would need to pull off this look.

After purchasing everything we needed, and taking many trips to Walmart for additional spray paint - since we didn't know how many we we would need. At $4.00 each, we ended up using a total of 17 spray cans. The clothes really soaked up the paint, so it took quite a lot of coats. Everything was sprayed outdoors on top of cardboard boxes and it took a few hours and touch ups a couple days later. The plastic items were the easiest to spray paint, as they would dry the quickest and required the least amount of coats. The clothes became extremely stiff and literally felt like plastic, so this made walking around quite interesting and truly put us in "character" mode, as if we were toys. I had leggings and a tight fitted shirt underneath to feel more comfortable throughout the night.

For our floor pieces, we purchased two foam poster boards and used our largest plates in the kitchen to measure. We traced around with a pencil and cut around the tracing using a U-Line Utility Knife. The spray painting happened after it was all cut to shape.

Putting everything on took about 40 minutes. The face paint was the easiest part of it all. Even though this was a lot of work, it was so worth it and fun walking around feeling like actual toys.