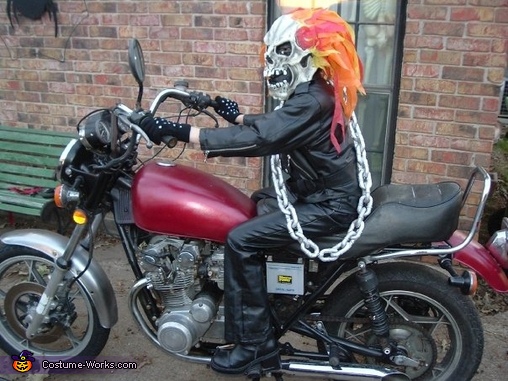 A word from Dorothy, the 'Ghost Rider' costume creator:

My son Joseph has always loved watching the movie Ghost Rider so I thought why not make him a costume for Halloween. I got a cheap pair of fake leather pants and some used boots all at the Goodwill, he already had a fake leather jacket. I then got fake plastic chain from Wal-Mart and sprayed it silver. I got a cheap skull mask from the discount store and hand stitched a small battery operated strand of orange lights to the head of the skull and then used red, yellow and orange tissue paper and cut out long fake flames and used craft glue to glue them over the top of the lights, Got some cheap black gloves and added fake studs by simply dabbing on silver sparkle glue. When it gets dark we turn the head on and it glows like real flames! Since I had some of the stuff, my total cost for this costume was under $20