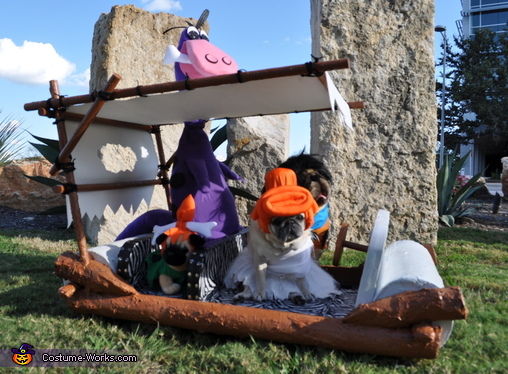 A word from Janet, the 'Flintstones' costume creator:

My little Pug, Kiwi, is dressed as Wilma Flintstone. Her dress is made of ivory seude and the necklace is strung using cotton candy pearls. Wilma's "hair" is made of dancer's stretch fabric, stuffing and the bun is a chunk of pool noodle. I used coils of fabric to look like the twists of Wilma's hair. I used two stuffed Pugs as Fred and Pebbles. Their costumes are made out of fabric and textured felt for the black animal spots. Dino is formed using stiff pillow foam cut in half, with a piece of PVC running through his middle to provide extra support and the PVC runs through an opening in the canopy. Dino's head is removable so that we can transport the mobile inside our SUV. His head has a pool noodle with stuffing around it shaping his snout. The pool noodle secures the head perfectly on the PVC pipe. Dino is covered in purple fleece and his face is decorated with felt which has been glued on with fabric glue. His collar is cotton fabric with sewn on charms.

I found instructions for a Flintstone mobile (great site!) some ideas of which I was able to incorporate in our car. The "logs" are made with plywood, with a pool noodle cut in half to add rounded shape. The noodle is glued to the plywood. The wooden texture is provided by Bondo Glass applied and sanded a bit, then spray painted. The wheels are cement forms, again, covered with Bondo for a nice stone texture and then spray painted. There are casters on the bottom of the cart so it can be pulled along. (I dress as Fred during "live" pet costume competitions!!) The inside of the car is wood, upholstered with a nice zebra print. The canopy is framed with dowels which have been textured with Bondo and spray painted and the canopy itself is vinyl with grummets and laced on with leather strapping.

This took some time, I'm just guessing on the cost cause I really don't want to know -- $300 -- but it was so much fun watching it come to life and has been a blast taking it on the road. Yabba, dabba, doooo!!!