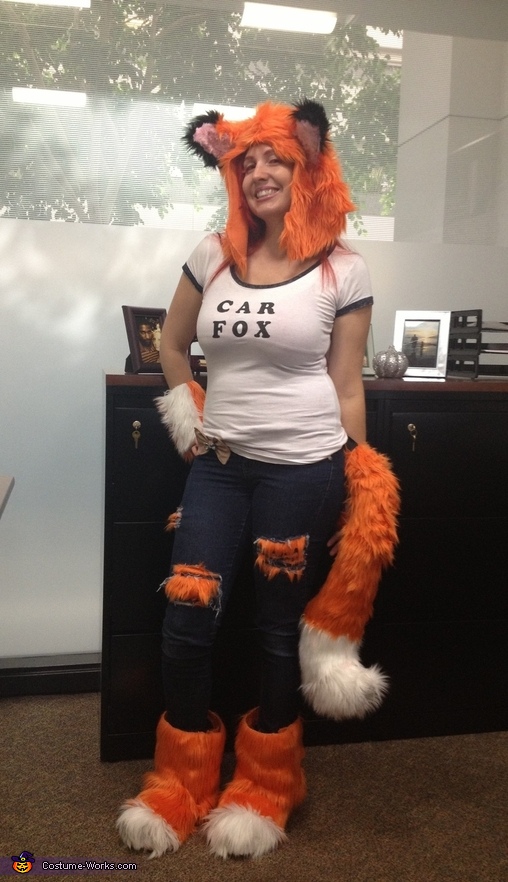 A word from Crystal, the 'Car Fox' costume creator:

I wanted to be a bright, orange fox but needed a twist – so I came up with the Car Fox (from the Car Fax commercials)! It was so fun to be the Car Fox and have a unique costume that made people snap their fingers and say “haaaah!”

There are 6 parts to the costume – arm cuffs, hood, boot covers, tail, shirt, and pants.

For each cuff, I cut out a rectangle of orange fur (about 7” long) and a much thinner white portion. I sewed the white portion to the orange (make sure that the fur is going the same direction) and that was that. Super easy!

Sidenote: cut the fur from the backside with a utility knife if you can – don’t use scissors or the fur will get everywhere. It still did get everywhere, but it would’ve been way worse with scissors. I laid it down on a towel over carpet, so clean up was easy.

I measured the hood shape with newspapers (fancy, huh?) to get the length/ fit I wanted. I used two pieces to make the hood so there is only one seam (less cutting, less sewing, less margin for error). I sewed it together and cut a little more off the front as needed.

Then I made the ears. I drew out the ears on regular paper and then decided how much black I wanted to use on the tip. I cut the pink fabric a little smaller, as well as the craft foam. I sewed the orange and black fur together, and then sewed the top 2/3 of the pink (all inside out). Since the pink was smaller, it brought the orange/ black around the edges a bit. Then I flipped it outside in so the fur was on the outside and I stuffed the craft foam inside. I hand sewed the bottom of the ears closed.

I put the hood on my head and placed the ears on top to find the right position. Then I hand sewed them in place and went over it a million times to make sure they stayed in place.

I took a couple sheets of paper and wrapped them around my Uggs to make a stencil. I made sure to note the direction of the fur (using arrowsI had two patterns - the larger rectangular part for around the boot opening and the crescent-like part for the top of the foot/toes. The crescent part was then divided into two for the white toes.

So I cut the fabric and sewed it together. The fur was very forgiving of my semi-newbie sew skills. I sewed the top part first (rectangle), then the two pieces of the second part (crescent), and then I sewed them together.

I drew out the shape that I wanted on an old bag and then cut it into sections where the direction changed. I drew arrows noting where the fur should face, and wrote the color/ order. Then I cut out the pcs and placed them on the fur in the direction as noted. This is where your arrows come into play. I wrote "L" as well as the "O1" on each piece I traced. Then I flipped it over and traced them, writing "R" as well as the "O1" on each piece.

I did the same thing with the white pieces, and then laid everything out together to see how my shape was coming.

Sew time! I sewed the individual sides together first - so LO1, LO2, LO3, LW1, and LW2. Then I did the same with the R side. Once the two sides were ready, I sewed them together. It really helped to pin everything down!

I actually used Christmas "snow" as my stuffing. I got a huge bag for very cheap and it was nice and light. I wanted a nice, plump tail so I stuffed a lot of fluff in there.

You wear the tail by looping the elastic over a belt. I didn't even put my belt in my pant beltloops because I wanted to re-position the tail all day. I would slide it to the side every time I got in the car or even while sitting in my chair at work. BTW - I wore my costume all day to work.

Bonus: The tail swung side to side as I walked, like I was wagging it, so I had fun with that all day :)

This was probably the easiest part of the costume. First, I colored in the collar and sleeve rims with black sharpie. That gave it the "ringer" look. Then I found iron on letters, cut them out, and ironed them onto the shirt.

I found some old pre-baby jeans that barely fit. Literally, I could not even zip them up all the way let alone button them... but I had a belt to cover that ;)

I cut horizontal lines into the jeans in three areas to make the holes. Then I washed them and they came out all frayed. I actually cut more strips (made some thinner and cut some out altogether) then washed them again. I like the look it made.

Then I took scraps on my orange fur and hand sewed them to the jeans, on the inside. I basically sewed all around the edges of the fur fabric (using black thread). Once it was all in there, I pulled out some fur so it stuck out more. Lots of people said this was their fave part of the costume.

*The pants, already too small, became a little tighter with the sewn in fur. I guess it made those parts stiffer and less stretchy. So when I bent down to put my baby in his carseat, I totally busted one of the seams! I first fake-destroyed the jeans, then I really destroyed them lol. It still looked fine so I didn't mend it at all, but it was pretty funny.