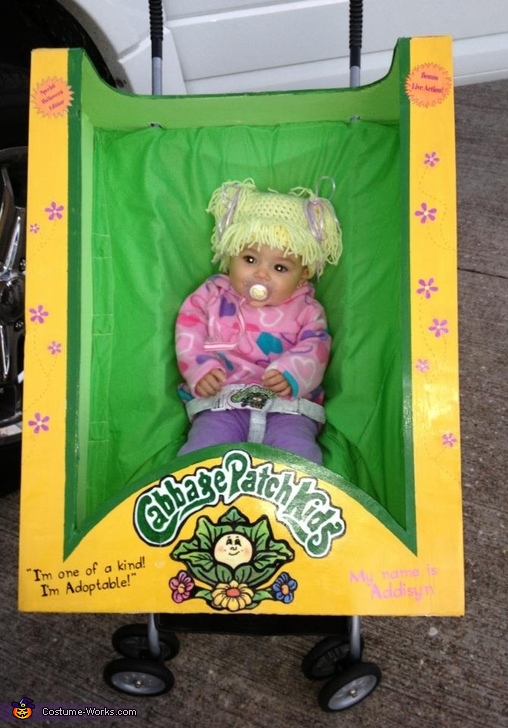 A word from Debbie, the 'Cabbage Patch Doll' costume creator:

This is my granddaughter Addisyn. My daughter in law saw a picture of a crocheted wig for a cabbage patch doll and this costume came from that. I created a "box" from foam board leaving the back open. The depth of the box will depend on your child, make sure there is plenty of leg room. I cut the front opening in the shape of a cabbage patch kids box. I cut notches in the top and bottom to coincide with the umbrella stroller frame I was using. After hot gluing and taping the box securely together I wrapped the entire box in poster paper and painted it. I printed out a Cabbage Patch Kids logo sized to fit the box on card stock. I cut it out and glued on the front. I painted flowers and used a Cricut to put the lettering on. I cut a piece of fabric and hot glued it to the inside top,sides, and bottom to look like the backing of the box. Make sure there is enough fabric so when the child is put in it won't pull the fabric away from the box. Cut slits to put the safety belt through. I printed another Cabbage Patch Kid logo on card stock large enough to cover the buckle. The box sits on the front of the stroller. The "doll" was loaded from the front. Dress your "doll" in any outfit and put wig on. Luckily she took a pacifier which worked out perfect for the effect.