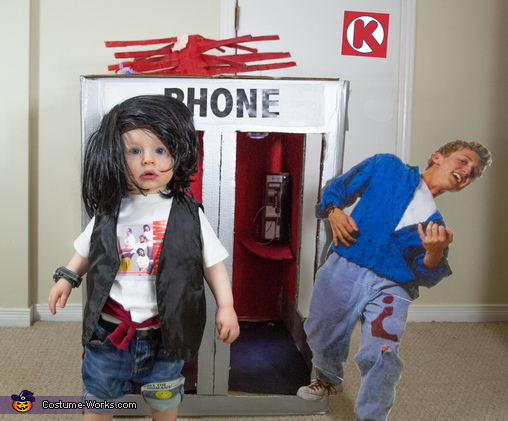 My 14 month old son Zander is wearing the costume (he's Ted). His portion of the costume was created with clothes he already had, with the happy face and Save the Whales stickers on his pants and the Van Halen logo on the shirt printed and stuck on. We already had the wig on hand, as well as the vest, shoes and socks.

The phone booth was created with a home depot wardrobe box. Cut and painted using metallic paint and red acrylic. The PHONE word was printed and cut out and put on top of an area painted white. The phone in the booth was printed off and stuck onto some cardboard.

There is also a small, dollar store LED light stuck to the ceiling on the inside of the phone booth for authenticity. Bill is printed out using the "print to multiple pages" option for printer, then cut out and glue to some cardboard so that he could be attached to the phone booth.

The antennae was also made with cardboard. And the "gum" (used in the movie to keep the time machine going) was unbaked sculpy clay. Not shown in this photo are the caster wheels that were attached to the bottom of the phone booth so that the whole costume was easily moveable for trick or treating.