Kyle from South Park
by Kim 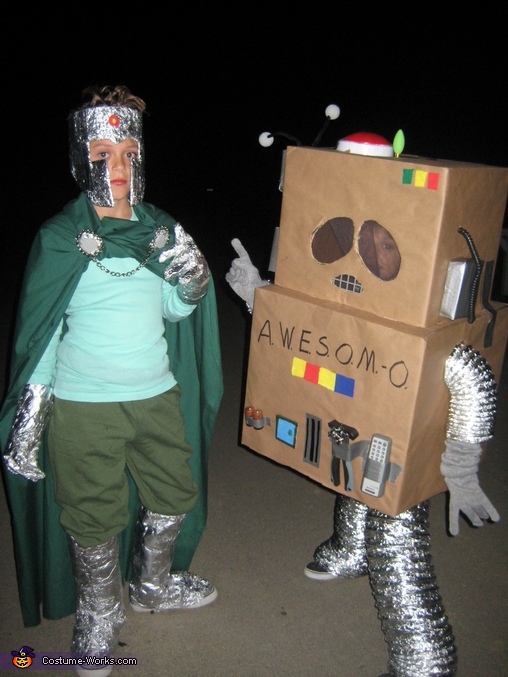 A word from Angela, the 'AWESOM-O & Professor Chaos' costume creator:

This is Rylan going as AWESOM-O and Anthony going as Professor Chaos from South Park. The last couple of years we've decided to make the kids costumes. That way they can be something/someone that no one else will be, PLUS it's super getting them involved in the making of the costume.

We had just moved so we have plenty of boxes. I wrapped all the boxes in brown mailing paper. The box he is wearing on his head has a baseball helmet attached so that while our trick-or-treating it would stay in place. We placed a mesh material over the eyes to kind of fade out what the inside.

All of the pieces that are duct taped to the box were bought at the dollar store. The arms and legs were made from dryer vents that we bought at Lowes. We safety pinned those to the sweat pants he was wearing.

This one was pretty simple. Green sweat pants, minty colored turtle neck, green fabric we made into a cape. The hardest part of this costume was covering his cardboard pieces in reynolds wrap & shaping his boots.

For the boots I had him stand in front of me while i shaped them to fit over his shoes. After I got the initial shape done I added about 3 more layers of reynolds wrap and then taped the entire boot in clear packing tape. We did the same thing for his hands except I had him put on gloves before I covered them in the reynolds wrap - this made them easier to take on and off.

My husband used cardboard to make his headpiece. That too was wrapped in reynolds wrapped and then taped with the packing tape.

This was a great Halloween. The boys had a ton of fun, they were recognized by strangers, and people kept taking their pictures. They felt like movie stars!