Alice in Wonderland
by Katie

Alice in Wonderland
by Jessica

Alice in Wonderland
by Eileen 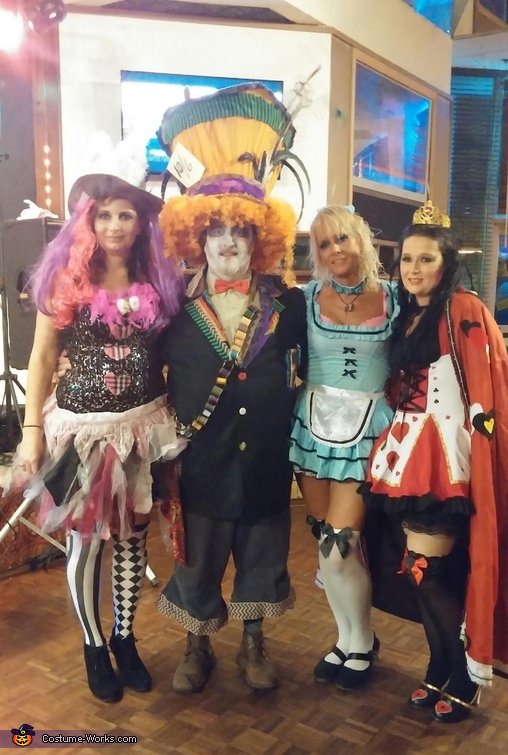 A word from Sheila, the 'Alice in Wonderland' costume creator:

My husband is wearing the costume the idea came from me wanting to be the Alice chapaper r and then talking my husband into being the mad hatter so almost 2 months ago I started working on the mad hatter costume I bought the suit jacket,shirt,socks and bow tie at different thrift stores. The pants are some old dress slacks I already had as well as the shoes. The hat is made from cardboard and and decorated with scrap pieces of material ,some I already had and some I bought from a thrift store then I added some feathers from my mom's chickens and peacock feathers she had as well,the jacket I jazzed up with several different pieces of scrap material and diffrent colred buttons,the shirt cuffs are cut from an old lace curtain I had ,I cut the slacks off at the shin and added some stuff ribbon material and the ammo is made with black leather string and old spools of thread I borrowed from my mom,and since I don't really care to sew most everything is attached with hot glue. Then our of my daughters wanted to participate so one was the queen of hearts and the other the rabbit the queen of hearts dress and crown was bought but I decorated the cape with ribbon,lace,beads and hearts I cut our of felt and glitter foam paper I already had the cape saved from several years ago and everything that's decorating it I had on hand the shoes were bought at a thrift store and decorated with spray paint and felt hearts.The rabbits shirt and pink and purple hair was bought at a thrift store I decorated the shirt with hearts made out of some plaid material,and a boa, the hat was a simple short topped sun hat bought at a thrift store and then I built the height up with poster board and then decopodged it with tissue paper and added a scarf around the brim with felt hearts and added some bunny ears bought from the dollar tree,the theigh highs were bought and the shoes my daughter already had the skirt was made out if tulle and some shiny material I bought at Walmart. I paid around $7 for the mad hatter things I think the jacket was the most expensive I paid a whopping 3.75 for it and $2 for the shirt. The lace,ribbons,buttons and material was around around a dollar, pants,and shoes were free the hat I think was .50 because the card board on part of it was made from cardboard used to put together a box to hold envelopes at a wedding .the queen of hearts cape was free I already had everything to decorate the shoes were $4 the rabbit hat cost .50 the shirt was $3, the tulle material was $5 the ears and bow were $1