The Wizard of Oz
by Angie

Off to see the Wizard
by Michelle 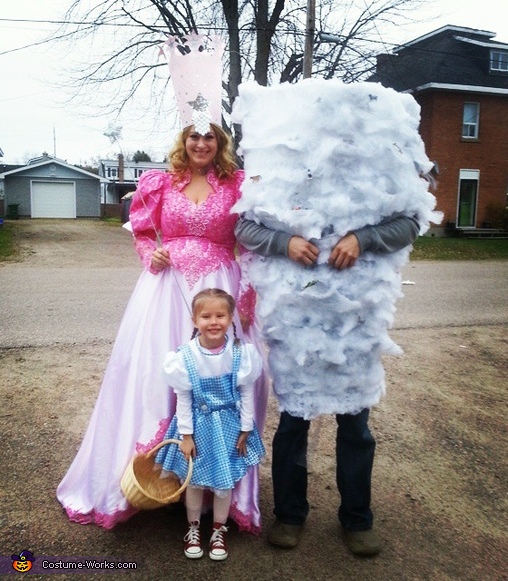 A word from Trish, the 'Wizard of Oz Family' costume creator:

My four year old wanted to dress up as Dorothy for Hallowe'en. Fortunately, a friend had a costume she could borrow. She loves her Converse High Tops, so I used them for the sparkly shoes. They were very easy to convert from pink to red - I simply used craft paint and the canvas soaked it right up. I mixed white glue and red sparkles and painted that over the red in two layers. The sparkles held up through a day at school, trick or treating and for several wears afterwards. Total cost was $3, thanks to the borrowed dress.

We're fans of family costumes, so I decided on Glinda for myself and the twister for my husband (I later turned that into a Sharknado costume for a party).

For Glinda, I purchased a wedding dress from Value Village for $10, and a package of Rit dye for $15. I followed the instructions on the package for dying the dress, with a LOT of anxiety! I looked for several reference pictures online for her crown and sketched it out on white bristol board. Pink tissue paper was podged onto it (I couldn't find pink board). The sparkly accessories were found at the dollar store, and using the reference photos, added on to the crown. The wand was a driveway reflector combined with the end of a child's fairy wand (both also found at the dollar store). The wig was also a dollar store find. Crinolines were borrowed from a local threatre company's costume closet. Total cost was approx. $25.

The tornado was created with chicken wire, batting, duct tape, spray paint, hot glue and plastic animal toys. The chicken wire was $13 (and I still have quite a bit left over) from a local hardware store. The batting was ripped out of a comforter purchased for $4 from Value Village. I formed the chicken wire around my husband, using wire cutters to cut out arm holes. Duct tape held it together and covered the sharp edges. The batting was torn into strips and wound around the frame, using hot glue. Spray paint was swirled around the funnel to give it some colour and depth. Plastic toys from the dollar store (farm animals) were also hot glued. There was a thinner spot of batting where he looked out so that he could see where he was going! The cost for this costume was also around $25.