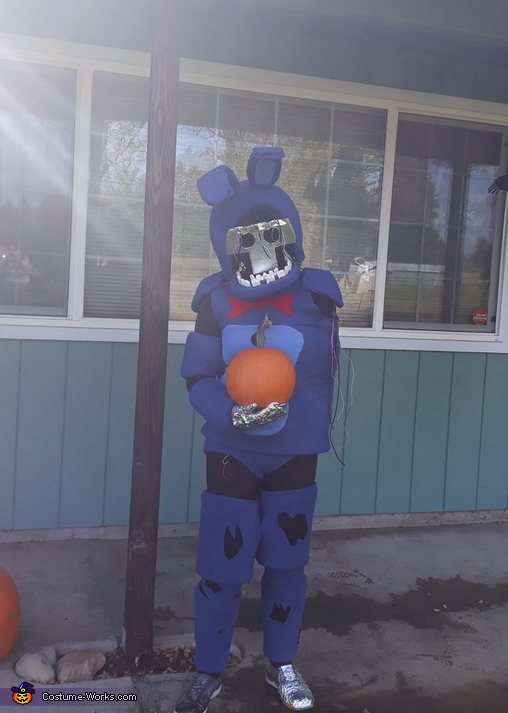 Withered Bonnie with a pumpkin

This homemade costume for kids entered our 2020 Halloween Costume Contest.

A word from Cecelia, the 'Withered Bonnie' costume creator:

This costume was made by me, Cecelia Pilon, 11, along with my dad, too old to be making video game costumes. My costume is from a game called "Five Nights at Freddy's 2" by Scott Cawthon. The majority of the costume is made out of foam and fleece. Other items used are; computer wires, felt, old kneepads, old shoes, an old glove, metallic tape, cardboard, metal leaf, elastic, paper Mache (newspaper, glue, water, flour, water), fairy lights, electrical tape, and paper Mache clay (toilet paper, water, flour). We started at about the beginning of October but began to abandon it almost right away, believing it would be impossible for 2 unexperienced people to make a full on mascot costume. But, deciding this is NOT a lost cause, we started back up at about October 16th. There were dome regrets working on the costume. "we aren't gonna get it done." and "I'm worried we won't be able to make it look as good as the others.". But once we were done we were very happy how it turne3d out. making the costume I started by making a paper Mache head base around a balloon. Followed by making the teeth out of paper Mache clay. then, waiting for a long time before fitting it on my head, cutting a hole out the center, and covering it in fleece. We then began to work on the torso and pelvis, cutting and fitting pieces of foam around my body. Followed by making thighs, calves, bicep, forearm, knees, and shoulders out of foam. Then, we covered all the pieces in fleece. We made a "T" shape out of cardboard and covered it in metal leaf. Then cut circles a little larger than my eyes in the correct area. After that we got a string of red fairy lights and covered all of them, but two, in black electrical tape. We put the fairy lights in the eye holes and put the "T" in the hole in the front of the mask. We filled the mask with foam to make it fit my head. Then, we cut holes in the legs pieces and put black felt under them. We put computer wires as the left arm and put them in other places such as the face and the pelvis. We made the jaw out of cardboard covered in fleece and put a net of elastic at the top to go on my head. Followed by gluing the teeth in. We ordered a "Second Skin" skintight black costume to wear underneath. We covered a glove and a shoe and a garden glove in metallic tape. Putting my costume on is quite tough. First, I have to put on my skintight suit. Then, I have to put the thighs, knees, and calves on in. followed by the torso, followed by the bicep and forearm and the pelvis. I then have to put the jaw and head on. Then, I have to take my torso off a bit and stick my arm behind my torso. And I'm done!