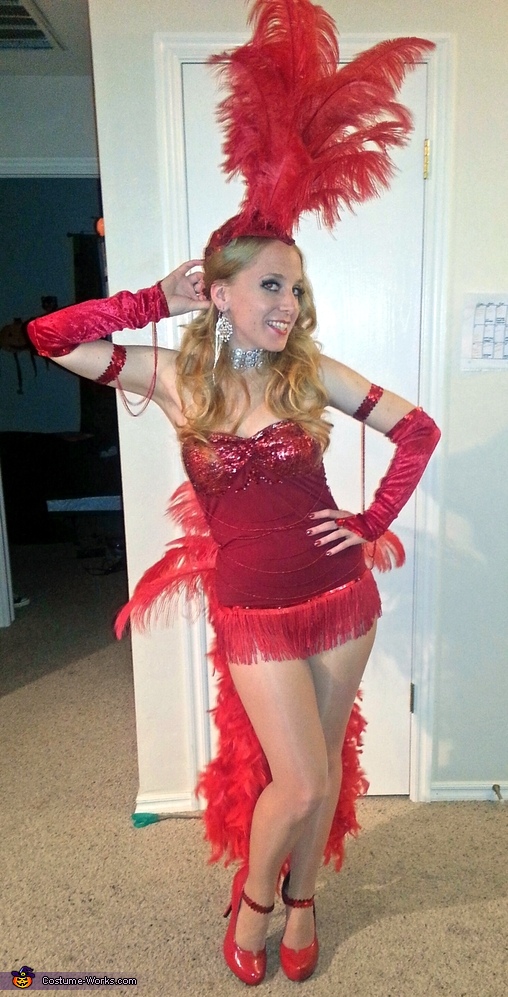 A word from Tara, the 'Vegas Showgirl' costume creator:

This is my Vegas showgirl costume, inspired by my love for Las Vegas! I love making and wearing costumes and this year I wanted to do something elaborate. I had the idea to make a showgirl costume because they are so fun and glamorous (in the Vegas way, of course). My costume was almost entirely homemade (or altered from store bought items). I bought a plain red leotard and covered it in beads, sequins, rhinestones, and fringe. The headpiece was made from a headband and wire, covered in fabric, then covered in feathers. The base of the fantail was simply a piece of cardboard folded in half, then covered in ostrich feathers and boas. I attached a piece of ribbon and tied it around my waist, hiding the ribbon under my skirt fringe. I had the gloves from a previous costume, but cut the fingers off to show my manicure, which I did myself (lots of glitter and rhinestones). The choker necklace was made from a bracelet, that I just added beads to. It was a very fun costume to make and to wear. It made me want to move to Vegas and be a real showgirl!