Twisty the Clown
by Johnny

Twisty the Clown
by Duke 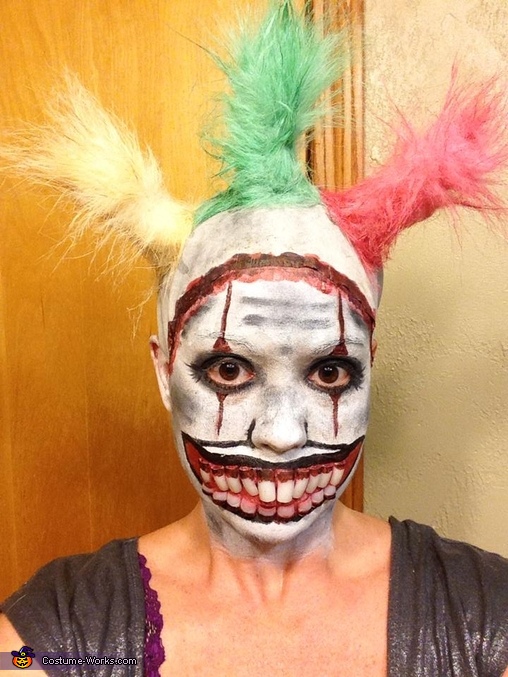 Not so scary in the light, but shows make up detail.

A word from Katrina, the 'Twisty the Clown' costume creator:

I am a 5'2" woman. I got the idea to create this costume while watching the second episode of AHS:Freakshow on FX. There were numerous articles on the web about how he freaked out even the cast members when the actor (John Carroll Lynch) was in full costume and makeup and just standing on set! Couple that with the general fear of clowns and I felt this was the costume for me!
I bought a pair of size 3X white scrub pants and a women's 18W white button up shirt. ($7)
At a local costume shop I bought an old "trojan warrior" costume that had a big skirt already trimmed in red. ($3) to make the collar.
At the craft store I purchased a 4 pack of red pom poms, a piece of white fur and red duct tape. ($8)
Other items were a bald cap, ($10), red cream make up ($1), fake blood ($2) and a box of black RIT dye. ($2)
Other items I already had, like grey make up, white make up and nail tips for teeth.

I cut off the collar, cuffs and removed the pocket of the shirt and planned to wear it
backwards. Hot glued the pom poms on, trimmed the sleeves in red duct tape and did a gathered stitch.
I then trimmed the pants in red duct tape as well. I didn't gather the legs because in order to make me 6' tall like the character my husband screwed an old pair of tennis shoes to 6x6 blocks that were 10" high, but after trimming about an inch or so off of the side matching the width of my shoe.
To make the collar, I cut off the skirting into two even strips, laid them out on top of each other, pinned, trimmed excess and then did a gathering stitch finishing with a small hook and eye closure.

I smeared white and grey make up on the bald cap and set it with baby powder.

To make the hair, I cut three rectangle pieces of fur and dipped each one in watered down acrylic paint matching the colors of the original.

For the facial make up, I used the same messy mixture of white and grey make up, made a "mask" out of black and red and then glued cut up nail tips for the teeth. I then filled in with red and black make up for the gums. I made it look even more dirty by adding black powder eyeshadow and smearing it all over my face.

I had a friend help cut and secure the bald cap with liquid latex, then added red and black cream make up to the seam of the forehead as well as blood.

I took the dried fur, rolled them to make tubes and hot glued the seam, then attached to the top of the bald cap with liquid latex while wearing it.

This was a HUGE hit at the costume contest I went to! People recognized the character and I had a lot of photo opportunities asked! If they didn't know the character, they were still freaked out because Twisty is just scary!