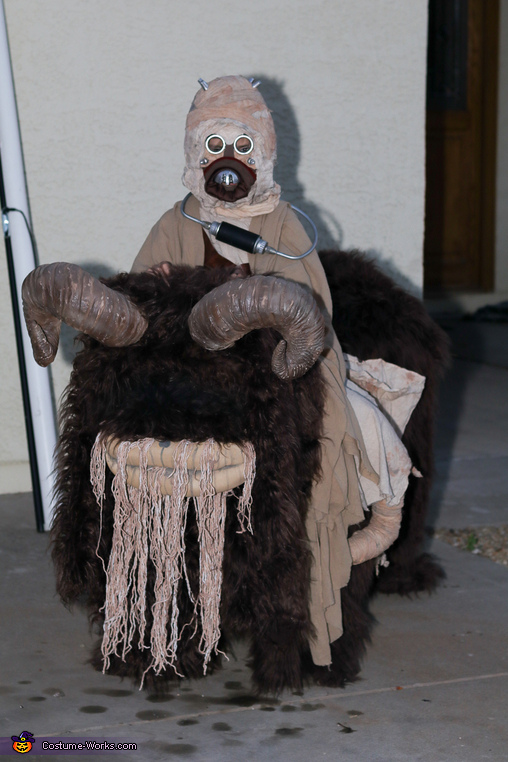 A word from Kelly, the 'Tusken Raider riding a Bantha' costume creator:

My 9 year old son, Cyrus is wearing the Tusken Raider riding a Bantha costume that my husband and I created for him.
To accomplish the looks and function of the Bantha, we needed to do some serious planning and engineering. For the construction of the Bantha, my husband, Brian, welded (Cy helped weld, too) square steel tubing for the hips, spine and legs, then used thinner metal tubing for the ribs. Circles from tomato cages were welded to the legs for shape. He used connecting rods and cams to make the hips go up and down as the wheels rolled to make it look like it was walking. A large piece of leather was attached above the hips to spread the movement out over a wider girth. Two 2x4 blocks of wood were attached as feet. Part of a tomato cage was cut and welded on to be used as the frame for the head. A piece of square tubing was welded to the back and weights were added. This created a tail as well as a counter weight so that Cyrus would be able to easily walk with it strapped on his shoulders.
We used wires from the tomato cage to create the base of the horns. I covered them in plastic soft drink cups to round them out. We then used fiberglass resin for strength. Brian coated them with bondo and sculpted the bondo to look like real horns. They were spray painted two different shades and sanded for added dimension.
We covered the frame with about 3 ½ yards of fake fur, pinning it to the frame to shape it like a Bantha. We sprayed black hair spray in the eye area for dimension. Fur was also stapled to the wooden feet. I sewed and hand painted the lips, then attached dyed, separated mop strands to them.
For the fake legs straddling the Bantha I stuffed a pair of pantyhose and mache’d the ends with dyed strips of fabric. I positioned them to look like feet as they dried.
For the Tusken Raider mask, we paper mache’d a balloon for the base. Once dried, we coated it in fiberglass resin for strength. I then mache’d it again using dyed strips of fabric. I cut a Styrofoam ball and painted it silver for the mouthpiece. I then sewed a small piece of brown satin for the bottom “lip.” I wrapped it in brown craft foam to complete the shape and look. Small plastic fittings, rubber stoppers and pvc pipe were painted silver and used for the remaining elements of the mask.
For the neckwear, we emptied two small air freshener cans, cut them in half and connected them so the tops were on either end. The center was then spray painted black. Soda bottle caps were colored using a silver permanent marker and attached to each end of the can. Brian bent a metal brake line and attached the fittings, flaring then ends of the lines to hold the fittings. He JB welded the other part of the fitting to the centerpiece air freshener contraption.
I dyed muslin and sewed it together for base robe/skirt and then used a crepe like material for the outer robe, draping them over Cyrus as I went to create the pattern/design. The cross straps were cut from vinyl and attached to a nylon strap. I sewed Velcro to the back of the strap to hold it in place. The belt was recycled from a purchased costume worn previously. I attached elastic to two strips of fur for Cyrus to wear around his legs when “riding” the Bantha so that his legs would look like the creature’s front legs.
The reactions we received when Cyrus wore his Tusken Raider riding a Bantha costume were beyond what I could have imagined. Every few steps, he was stopped by people wanting to take pictures and pet it. A couple people even tried to jump on the back! Several people thought there was another person in the hind end because of the movement when it walked. People were absolutely blown away by the costume.
It was so fun to build and sew this costume! Thank you for your consideration!