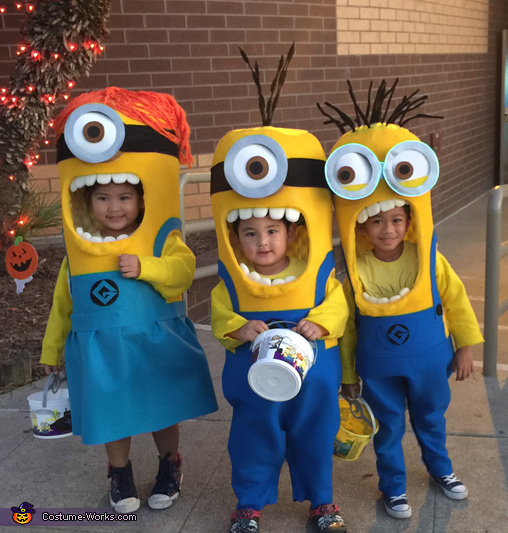 A word from Joseph, the 'Three Little Minions' costume creator:

My 5 year old Son (Liam) loves dressing up during Halloween season and he share the same enthusiasm with his friends (Cezin and Pete). For this year’s costume of choice, it was actually my Son’s choice because he loves the minions character. When I did asked him what costume he wants for this year’s Halloween and he answered Minion right away. When October comes, I started searching the web for a Minion costume but I had a hard time looking for one that I want. I am really after for a costume that is unique and somehow make my Son different from any other kids that wears the minion costume. With this in mind, I realize there is no way that I can find a unique costume if I will just buy it somewhere so my creativity kicks in and thought of creating a minion costume for my Son.
With the go signal from my Wife, the “Minion Costume Project” was started as early as 1st week of October. My initial challenge was finding a material for the main minion body. I initially thought of using a cardboard to mold the body but I was thinking if it will be comfortable for my Son to wear the cardboard body of the minion. Considering how active my Son is, I realized that there is no way that the cardboard body will work. Being an Engineer by profession, I don’t want to jump and start the project right away without doing some analysis when it comes to the quality of the costume especially my Son will be wearing it, so I did more research for a perfect material for the minion body. I haven’t done a DIY costume before so I have to rely on the internet for my research. I eventually bump into a forum and one user mentioned a foam / mattress material when he did a banana costume so I realized that it the exact material that I am looking for.
After finalizing all the materials that I need and having all the right tools to make the costume, I eventually shared the idea to my friend (Cezin & Pete’s Mom). I told her it would be the cutest costume that the kids will be wearing for the Halloween compared to the previous ones. My friend decided to asked Cezin and Pete if they like a minion costume for Halloween and Cezin said a big YES right away. For Pete, he likes a BATMAN initially but when we showed him the picture of a minion character he finally said YES but he calls it BANANA though. Hehe.
So when everything was all set, got the approvals of those who will be wearing it, and got all the details where I will be buying the materials, the “Minion Costume Project” was started. Day-1 was October 3, 2015.


This is the first time I made a costume from scratch and I can say that all the time I spent (total of 60 hrs for 3 costumes) are all worth it. By the way, thanks for my Wife on helping me doing those teeth. It really takes time to mold the teeth so I am thankful she is around. Hearing those complements from those people who saw it is just amazing. The kids also had great time getting attentions from other people and they were so happy hearing their names every time they got their best costume awards. I can say that this Halloween 2015 is the best Halloween we had so far. The downside though is that the kids only had few candies and chocolates. I think I can buy them more candies if I will win the 1st place of this costume contest. 