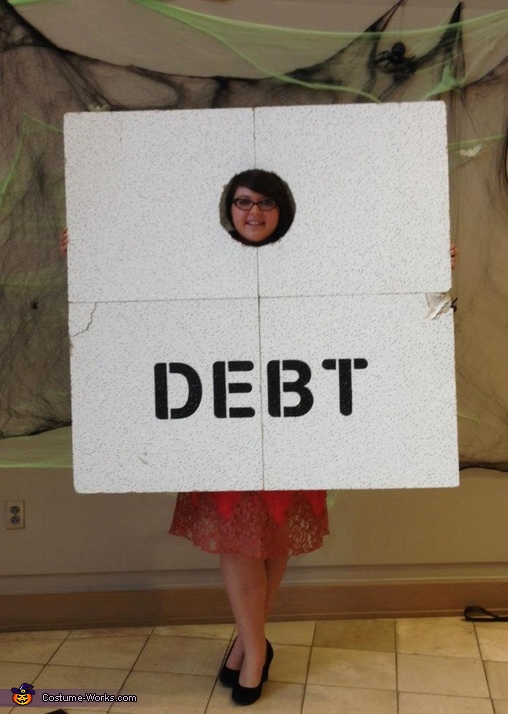 A word from Megan, the 'The Debt Ceiling' costume creator:

I wanted to do something topical, something relevant to 2013. I knew there would be plenty of Miley Cyrus' and Heisenbergs' out there, so I wanted to think outside of the box. I wanted to keep the costume simple, easily recognizable, effective, and humorous. As I was brainstorming in my office one day, I found myself becoming frustrated; none of my ideas seemed to quite fit. In deep thought, I happened to gaze up at the ceiling...and BAM!! This idea began formulating, circulating in my brain; in about 10 minutes, I had the whole thing planned, mapped out, and a list of items I desperately needed from Home Depot. The process of making this took about four hours, and worth every minute!

We used an abundance of masking tape to fit the four tiles together, four thin stakes on the back side to frame and support the tiles, a handy box cutter to cut out the hole for my face, and stencils (i'm terrible at drawing/writing) to craft the final, paramount touch: "Debt."

The tiles became a bit damaged when transporting, but I think it adds to the overall effect; I sure have seen plenty of dingy, busted office ceilings in my day! I believe that keeping this costume simple and recognizable helped make this a big hit (the internet seems to love it!).