Captain of the Titanic
by Sara

Captain Smith and the Titanic
by Nova 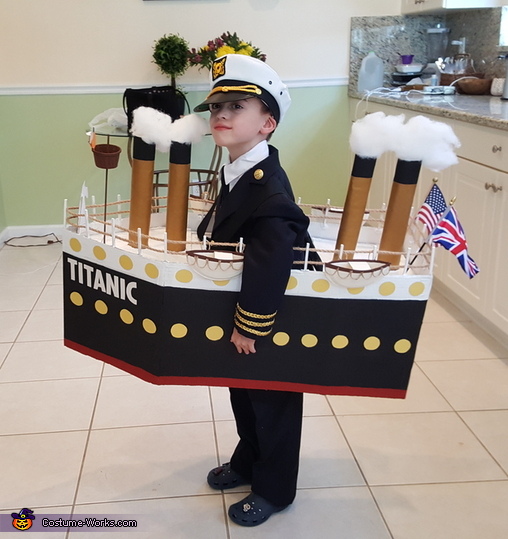 A word from Joan, the 'The Titanic' costume creator:

The idea for the costume came from my 7 year old grandson who saw the movie and fell in love with it watching it over and over again. He also went to library to get books to read on the history of the sinking of the Titanic. So his wish I tried to make come true in a Halloween costume.The base is a cardboard box that is also outline with cardboard to get the ships shape.The life boats are small paper plates cut in half and faced together with glue gun.i used twine rope for the rope affect on side of boats also was painted with brown trim. The outside of ship is all painted the smoke stacks are paper towel rolls painted gold and black. Smoke is stuffing used for stuffing pillows purchase at craft store.I also put a photo on front of ship cut out of Rose and Jack. The crows nest watcher which is a pumpkin in a candy cup on a dowel stick painted brown and attached with glue gun. The only thing I did not made is the flags attached to back of ship The fencing on outline of ship is also wooden dowels painted white with the swine roping attached with glue gun.His costume is his own suit which I bought gold braiding to sew on sleeves. Also replaced buttons in gold on jacket as well on his collar. Purchased his hat on line.Alot of cardboard paint glue gun and patience to put together. Loved doing it.