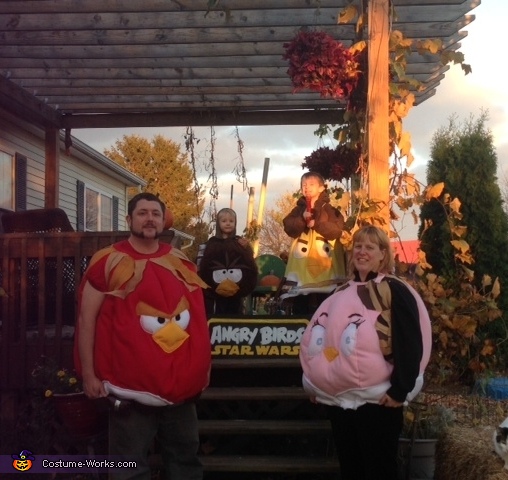 A word from Gretchen, the 'The Star Wars Angry Birds Family' costume creator:

The Star Wars Angry Birds Family came from my five year old. When I asked him what he wanted to be for Halloween he said Angry Birds and I thought, okay I can do that, but then he said “Star Wars Angry Birds”. I thought, oh man that makes it a challenge, and being the creative person I am I was up for the challenge. I used absolutely no patterns. For both my boys I needed costumes that were easy to get on and off and walk in safely, at their age they also don’t like make-up.
I started with my five year olds costume first because he wanted to be the Yellow Hans Solo bird, which was probably the easiest one to make. I used Yellow Fleece for the body pyramid shape and felt for the features and a hula hoop hand sewn in to hold the shape. The next costume I made was Chewbacca Angry Bird for my two year old. I had to do a little research as to how to get the best ball shape for a costume, I decided on using a beach ball method and made strips of fabric and stuffed them with fiber fill to make them fill out. Once I completed the Chewbacca costume I had the hang of it and decided to do one for myself and my husband, as part of our family costume theme. I am the pink Princess Leah bird and the fleece beach ball method was working nicely and I soon learned I had to stuff things as I sewed on the features. Details were important; adding eyelashes, hair buns, clothing, and belts to create the Star Wars Character Birds was fun yet challenging. Essentially we are walking fleece beach balls but it worked out perfectly! I was very excited to finish my husband’s costume a week before Halloween as I’m usually sewing late into the night before Halloween Day.
We wore our costumes to my children’s Halloween parties, work and Trick-or-treating and everyone has been pretty amazed. Many people asked where we got them, and were “wowed” when told I had made them. I think that is the biggest reward for me, all the excitement around having such a fun and different costume, that no one else had. Only once did my five year old trip over the hoop and take a dive, but no candy was lost and he was “all good”. My 2 year old looked like a cute little walking fur ball. We not only took home candy but lots of compliments on our costumes.