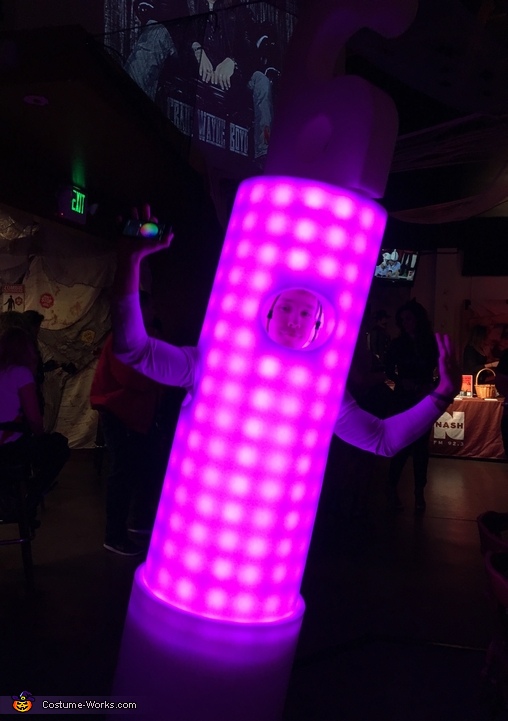 A word from Jeremiah, the 'The Human Glowstick' costume creator:

I have always wanted to integrate LEDs as the main focus of a costume, but at the same time I also hate doing the same things I have seen other people do. I wanted this costume to be distinctly different than anything I had ever seen, but at the same time express the fact that I love a good party atmosphere. So I combined my inner costume-fanatic with a bit of EDM (Electronic Dance Music), and came up with the idea to be a human-sized glow stick.

Honestly, a scale-model glow stick was going to be out of the question. As it stands, the 4-foot tall glowing section of the costume uses 238 LED modules for a total of about 229W of glowing capacity… and that takes a LOT of rechargeable batteries. Knowing that I would be scaling it down though presented a question: would people be able to recognize what I was?

To make sure that I was recognizable I devised a plan. I would hand out some glow-sticks to anybody who took a picture with me. And if after talking to them, they still had no idea about what a glow stick was? Well that’s where my trying stopped, and the party started... because if you can’t convince them you are what you are, well at least you can have a good time!

See, my costume LEDs are not just multi-colored, but are programmable. The entire costume is actually more like a display of lights controlled by my phone. And what can it do? It has animations, it has color-changing, it has a microphone so that the LEDs can dance to the beat of music, and it has a mode where I can even make my own light-show in real-time like a DJ might have.

The entire body of the costume is made from closed-cell polyethylene foam. I worked closely with a local foam-shop in the Silicon Valley area, and through 5 prototypes (one square foot, not full size), and 2 costly mistakes (reminder: measure twice, cut once!), they helped me get all the necessary foam for this project.

The general body construction is done by cutting pieces of foam to shape, and then re-attaching them to form 3-dimensional structures using 3M Super 77 Spray Adhesive. One of the biggest problems with this is that using 0.5-inch polyethylene, and a 17-inch diameter main body, there is a difference between the inner and outer circumferences of about 2 inches. To insure that the seams did not pull apart, I created a custom adhesive tape using strips of clear 10mil construction plastic, and more 3M Super 77.

The LED modules (238 of them) were soldered to length, spaced evenly across the surface of the cylinder, and then zip-tied to the inner-most layer of foam (to insure they would not fall or displace during use). If you do the math: 238 modules, 0.96W max each. That’s requires about 20Ah of current for one hour of use as a full-white glow stick.

In order to achieve max brightness at all, I knew I would need to use something like a Turnigy 20C LiPo Battery. Unfortunately, because battery voltages change slightly over use, a 3S (3 cells in series) LiPo would not have a high enough voltage for long enough, and a 4S LiPo would produce too much voltage at all times. So I needed to use two 10A Automotive 12V Regulators, dividing the entire workload of the LEDs between 2 Turnigy 4S LiPo Batteries. Additionally, because the brain of this costume is a micro-controller, I needed another 5V regulator to provide it with appropriate operating voltage.

The LED modules were 12V WS2801 modules ordered from AliExpress.com. They are controlled by code that I wrote for a Teensy 3.1 micro-controller from PJRC.com, over Bluetooth via a Bluefruit LE SPI Friend module from Adafruit.com (www.fastled.io provides a decent library for use with the WS2801 LEDs). Additionally, there are two controllable computer case fans that use a Mosfet power control module, along with a Sound Detector module both from SparkFun.com. The app on the phone is also made by Adafruit, and is available free from the iTunes store.
All of the electrical wiring is hidden in the foam insert that attaches the top hook of the glow stick to the costume

The great part is that for the first group, I don’t have to do anything, and they still seem to think it is one of the coolest costumes they have seen. In the second group I seem to keep enough attention to get a few selfies, but they are almost always mind-blown by the fact that I can control the costume with my phone. Finally, the last group, even though they have no reference, love the fact that I can put on a good light show, and are awe-struck when I make the LEDs move to the beat of music.

People love the fact that this is 100% home-made, and I personally love being able to share with them how they too could make their own LED costumes.